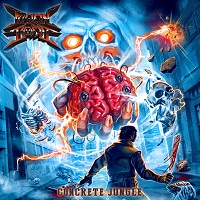 When it’s done properly, you can’t go wrong with good honest thrash. Sure, the genre might be a bit overpopulated of late, what with Dust Bolt, Shrapnel, Evil Invaders, Crisix, Angelus Apatrida, Gama Bomb, Desolator, Lost Society, Anihilated and literally hundreds of others jockeying for position alongside the classic ‘80s acts, but nothing hits the spot quite like it. ‘Concrete Jungle’ by Luxembourg four-piece Fusion Bomb is one of those albums. It doesn’t break any new ground or reset the benchmark by any means, but if you just want to wreck your neck muscles to high speed riffage look no further.

This is an album where you won’t need Google to figure out their influences, the Bay Area is stamped all over it. It’s cliched and predictable, but it also rages hard and absolutely slays from start to finish. There’s no ‘Fade To Black’ in their arsenal, it’s all pit-inducing carnage but Fusion Bomb understand that for thrash to work, there has to be at least some variation.

Thus, you get adrenalin-fuelled crossover like ‘TMNA’ alongside more mid-paced numbers like ‘Bird Of Prey.’ The stated mission of each is to get sweaty bodies churning in circles, but they’re done in a slightly different way. Granted, their idea of varied songs ranges from “full throttle” to “not quite full throttle,” but this slight change of pace between the tracks works wonders for the light and shade. ‘Concrete Jungle’ isn’t a head-down sprint to the finish line, it’s confident enough to ease off the pedal occasionally and let the choruses grab you as much as the guitar work.

Speaking of which, they’ve got some cracking anthems here. ‘Zest Of Scorn’ is a storming opener and provides a fitting soundtrack to an extended windmill workout, while the title track is an immediate earworm. Inevitably, there’s a song about moshing in here too but while ‘Slam Tornado’ doesn’t win any points for innovation, it’s hard not to be won over by the gang chants and razor-edged power chords.

Clocking in at a lean thirty-six minutes, ‘Concrete Jungle’ doesn’t overstay its welcome either and can easily be digested in one sitting. Fusion Bomb are shamelessly retro and this may hamstring any chance of them breaking into the genre’s upper echelons, but otherwise it’s a perfectly enjoyable ride. It’s also noteworthy that the closing cover-song (by oft-overlooked veterans Excel) is the weakest cut; the newcomers have outshone their heroes. Plus, they sound like they had a terrific time recording this so while Fusion Bomb won’t blow any minds, they might shatter a few eardrums this year.