Flamekeeper – ‘We Who Light The Fire’ (Invictus) 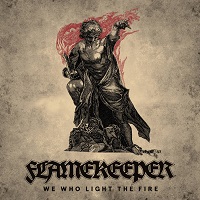 I really don’t know what do think about this one. It is very hard to put into words. For some reason it makes me think of the original Age Of Empires from back in the day. I have absolutely no idea why that is relevant but it is so strong in my mind. Maybe it is because back in the day I found that game hard to stay patient and always wanted to rush the objectives never being fully prepared. From that game, I learned that sometimes you are rewarded for waiting until the right moment. This album captures that patience. There are subtle changes through each track that slowly pulls you in and really reward you. Because of that the album demands your attention and rewards you for it. That is something hard to do but is truly special.

The vocals also follow that theme that just brings ancient warriors to mind. I can’t get Age OF Empires out of my mind while listening to this so I’m just going to roll with the analogies to it. The lead vocals and backup vocals have that power that is in your mind as a kid when you have your army ready to go and your imagination gives them a voice. The way the backup vocals emphasize the lead gives the impression of a chanting army. And the way that the backup vocals are louder when they respond to the lead really lends to that feeling of size. It lends to making the whole experience feel more powerful.

The music complements those vocals perfectly as well. I really love the guitar here. The tone is powerful while still not overwhelming. Instead, it builds wonderfully and takes on a few different styles that complement each other well and the transition between each feels natural. I did not think at any time that any part felt forced. I also liked how some relatively uncommon instruments were used within the mix. It is possible that they were effects added to a keyboard or guitar but still made for a really nice addition to the mix and I loved that they were there.