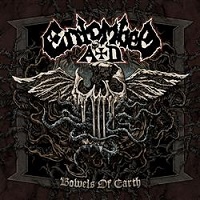 What with all the fuss over the new Tool album, it’s been only too easy to overlook some of the other recent releases. ‘Bowels Of Earth’ for instance had the minor misfortune of coming out at exactly the same time as ‘Fear Inoculum’ and consequently has had about one gazillionth of the publicity. Which is fair in some respects, after all Maynard James Keenan’s bunch have sold way more records and the music industry is always going to focus more attention on the mass unit shifters. However, it would be a crying shame if this were to disappear into perpetual obscurity, because it’s really bloody good.

It’s the latest release from Entombed A.D. who to all extents and purposes, are a continuation of Entombed, the classic Swedish band who pioneered “death and roll.” Technically it’s their third, but in truth it’s the 12th and fans of hefty, bull-headed savagery will love it. In fact, you could even consider it the anti-Tool; it’s straightforward, head-banging old school metal devoid of any pretension. It kicks off a pit, keeps it raging for 37 minutes, then calls it a day. It also doesn’t have a colander on the cover.

Want a killer opener? Well there’s only time for a brief cough before ‘Torment Remains’ kicks down the gates of hell and shits in Cerberus’ dog bowl. It’s a pulverising introduction that recalls the ‘Left Hand Path’ days, LG Petrov growling over high-speed riffs and break-neck drum beats. ‘Elimination’ and ‘Hell Is My Home’ keep the momentum going, while the monstrous title track actually manages to fit a powerfully addictive chorus into the mix. There’s a wicked guitar solo in the second half and it ends on a glass-gurgling roar.

‘Bourbon Nightmare’ meanwhile comes across like Lemmy trying his hand at death metal and there’s a surprisingly effective cover of ‘I’ll Never Get Out Of This World Alive’ by country legend Hank Williams. ‘Fit For A King’ impresses too with its whiplash-inducing thrash riffs and intestine-troubling rhythms. Close your eyes and you’ll immediately see bodies spilling over the barrier at a European festival.

It’s only when you get to the sombre atmospherics of the closing ‘To Eternal Night’ that Entombed A.D. give you a chance to regain your breath. There’s a clear doom-influence at work on this one, but otherwise ‘Bowels Of Earth’ rages with all the vigour and venom of a band half their age. Lars and the boys might not have the hairlines they once did, but they’ve still got the Wolverine blues and no mistake. Now can we please put that legal dispute to bed and let them drop the “A.D.”?