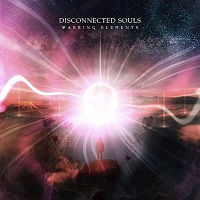 First impressions are always important when reviewing a new release. Sometimes it can make or break an album, or it can be completely misleading. So, when I picked up the reissue of Disconnected Souls’ debut EP and was instantly reminded of ‘Tron’ from the moment it opened, I just had to keep listening to find out whether this would be a continuing theme…

It quickly turned out that ‘Warring Elements’ was far more than a ‘Tron’-worshipping piece; instead it’s something that is far more impressive. To tell the story of two opposing forces, ‘Warring Elements’, the band have taken inspiration from metal, classical and electronica to sculpt something that could loosely be described as symphonic metal; but that would do it a disservice. There’s an almost progressive approach to the song writing that makes it ebb and flow through the story like a coursing river. It’s certainly something that is greater than the sum of its parts for sure, the way that the harsh vocals flow seamlessly into the clean male and female vocals, and the subtle blending of electronic elements in heavy metal passages is something to behold! If these core elements were not enough for you, there’s even the odd influence from Linkin Park-esque nu-metal too!

As you may have guessed, the opening track ‘Emergence’ is an instrumental electronic number, hence the Tron vibes, with ominous heavy drumbeats. It sounds like it could well be the opening to an ‘80s movie, or perhaps an old video game, but instead it serves as an atmosphere builder for ‘Warring Elements’ and that works for me! This leads me nicely into my favourite track though, which is the title track ‘Warring Elements’ as this manages to capture every influence into one neat package. It opens with an electronic pulse, similar to the album opener before the sombre vocals express the weariness of the battle between the two and results in a bit of call and repeat with the harsh vocalist. In some respects, it reminds of Amaranthe, but this doesn’t stick around for the whole track, as we are treated to an impromptu Mike Shinoda-style rap just to add an extra little something in case the combination wasn’t already impressive enough.

Considering this is only a debut EP, it’s certainly an impressive piece of work and more importantly it’s actually quite refreshing to have something that is pretty unique. Yes, the influences are all ones we’re familiar with, but I highly doubt you’ve heard them combined quite like this! The story of ‘Warring Elements’ is portrayed in a stunning manner through the clever juxtaposition of soft and heavy, and metal and electronic to bring you something that absolutely deserves attention. For fans of Amaranthe, Lacuna Coil, and for those who are always on the hunt for something new, it will be an attractive offer to connect with Disconnected Souls! For me, I can definitely see myself listening to this more often, but it’s something that needs to be enjoyed in full for maximum impact I feel.