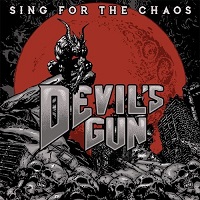 Heavy metal five-piece Devil’s Gun have returned with a follow up to 2016’s ‘Dirty ‘n’ Damned’. Since then they’ve been touring and writing and earning themselves a name as a no-nonsense metal band. ‘Sing for The Chaos’ sees them releasing ten brand new tracks cementing their sound further. In the run up to the release date, two singles have come from the album. Both ‘Lights Out’ and ‘Tear Down the Walls’ have earned praise from their fanbase and have built a healthy amount of anticipation around ‘Sing for The Chaos’.  Can Devil’s Gun come up with the goods?

Kicking off with ‘Killer Machine’, the listener is introduced to a wall of metal sound. Classic galloping riffs and a powerful rhythm section flesh out the texture. It’s got an instant hook before the vocals come in to round out the track. With a harsh edged, high register style, Joakim Hermansson delivers the lyrics. There’s an initial feeling that the vocals don’t quite match the feel of the music as they have a dramatic impact from the get-go, but as the track progresses everything comes together. The guitar solo features excellent interplay between the twin attack of Philip Nilsson and Jonatan Lavesson leading to a classic metal build up for the outro.

The rhythm section of drummer Fredrik Johansson and bassist Oliver Emanuelsson deliver the intro attack of ‘Tear Down the Wall’. It’s easy to see why this was chosen as one of the singles as it typifies a no-frills approach to metal combined with strong structured song writing. The instruments provide a relentless framework for the vocals to cut through with the now established high register delivery. The dynamics shift to create the build up before the frantic crescendo leads to the outro. These combined elements create a stand out track from ‘Sing for The Chaos’.

More of the same high tempo, furious metal style leads into ‘To the Devil’.  The guitar work is more prominent than the former track as they lay down a highly infectious melody which hooks around the powerful rhythm. ‘Lights Out’ follows up and has a very catchy groove running throughout, coupled with this is a crowd friendly chorus section making this once more an obvious single choice. The duelling guitars again lead the melody charge and provide a great twin solo. It’s a classic metal track in every sense, however, there is an underlying edge to the music when the listener pauses to look at the lyrics. According to the band, this was one of the first tracks written for the album and was penned following the terror attacks in Drottninggatan in Stockholm; the lyrics reflect this dark time combined with a rallying call of defiance in the face of these things.

The title track leads into the latter half of the album. With a big sing along chorus and an anthemic chorus and breakdown combined with a catchy riff, ‘Sing for The Chaos’ is sure to be a live favourite. Tracks like, ‘Electrical Shock’, ‘Queen of Destruction’ and ‘Bad to The Bone feature an earlier thrash sound to them with rapid fire drumming and chugging palm muted guitar chords. All the while the throat rupturing vocals cut cleanly through the mixes. Whereas album closer ‘On The Road’ features a more mid-tempo foot stomping rhythm to round out the record. With an AC/DC like delivery it’s once again got an anthemic quality that will surely see it’s warmly received by audiences.

To be honest, at first listen I did not know what to make of the sound of Devil’s Gun nor ‘Sing for The Chaos’. From the get-go the undeniable musicianship pulls the listener in with an infectious, well executed metal sound. The fact that the music takes elements from early NWOBHM and classic metal through to speed and thrash metal is great.

The influences of Devils Gun are clear to hear, and they’ve amalgamated it into a sound that is definitely their own. However, I was initially put off by the vocals. Having not heard the band before they came across as too much of a juxtaposition to the instrumentation and the perceived harshness left me thinking a lower register style would be a better fit. After a second listen though, the overall sound grew on me and further still the pieces began to fit. It’s a well-rounded metal album offering a lot to different fans. The mix of the tracks works well, allowing for all the instrumentation to be heard clearly without anything being taken away from the music, all the while the vocals cut through without any trouble.