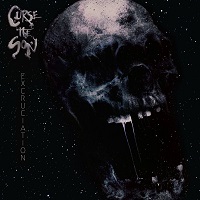 The world has shifted for US doom metallers Curse the Son. They’ve not had it easy since the release of last album ‘Isolator’ in early 2017. Drummer Michael Petrucci left the band and in late 2018 bassist Brendan Keefe was involved in a serious motorcycle accident. There’s nothing like a near death experience to invite perspective on the world. Through his long recovery, Ron Vanicore (vocals/guitar) and new drummer Robert Ives worked with him through the pain and devastation, building their relationship and using their shared experiences to fuel creation. In the new dynamic, Keefe contributes heavily and as a band they collectively broaden their horizons and darken the feel of their music to reflect their altered consciousness. Curse the Son is now inevitably more cognisant of how dark things can get but also of what it takes to move towards the light.

In retrospect then, ‘Death By Drummer’ is hauntingly prescient of a rebirth. The lyrics appear to describe drowning in the reality of an unexpected event only to rise up against hopelessness. When existence itself is unbearable, you succumb or you drag yourself out of the hole. Wailing guitars and deep bass coupled with Vanicore’s Ozzy inspired vocals set the tone for the album. The languid intro to ‘Disaster in Denial’ exemplifies stoner doom as echoes of Soundgarden surface. A staggering guitar solo adds a dash of Nirvana albeit heavier and at a third of the speed while ‘Novembre’ sounds like it’s growling at you as the vocals move down a few octaves.

My favourite track is ‘Worry Garden’ which sounds like Floyd had a bad trip and got smacked in the face with some metal. It has a rhythm that’s hard to ignore. Meanwhile ‘Excruciation’ is solemn and bluesy in sound. The vocals reverberate through the body and rasping guitars and leaden bass add to the feel. The pace picks up some with ‘Infinite Regression’ but the darkness and inevitability returns in ‘Black Box’.

Towards the end of the album is the glorious and rasping ‘Devil Doctor Blues’ which reminds me of early Black Keys. It’s impossible not to feel this song and, points made about how life has the habit of knocking you down, the band start to drag themselves up. ‘Phoenix Risin’’ is the final word, a demonstration of strength.

What strikes me about Curse The Son is the breadth and depth of their creativity. The vocal range, the tempo variation, and their sheer ability to create amazing sounds together. The constant in the album would be a deliberant persistent doom theme, but it is relayed in innovative ways by the Connecticut trio. They work well together, very well. Just like the band name demonstrates juxtaposition so ‘Excruciation’ is an oxymoron, a contradiction. In darkness there is light. In stoner doom there is new awareness and hope. Behold, Curse the Son has risen.