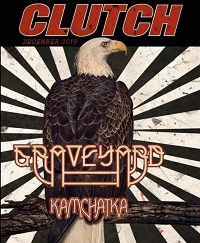 Clutch. A band that I got hooked on when I first saw them supporting Motörhead back in 2006. Since then it feels as if everything has conspired to stop me from seeing them again. When I was informed that they would be playing just across the water from me and, crucially, I was in the area, I was not going to be thwarted. This being the first of a four date UK run promises to be a night of big riffs and stamping rhythms with support from Graveyard and Kamchatka.

A brief note about the venue beforehand. While Southampton Guildhall remains a popular venue for many tours, it does have underlying sound issues. It has been well documented that the acoustics of the venue has hampered some performances in the past. It’s a decent enough capacity venue and does offer the chance to get up close to the bands, however, its design is suited for classical rather than amplified performances.

Kamchatka open the proceedings shortly after doors. As the venue begins to fill, they launch into their opening track. Immediately the sound issues of the setting are apparent and initially the harshness of the acoustics overpower the delivery of the music. This leads to some adjustment required that takes until the second song to fall into place. For a three piece they do pack a tight punching sound. Per Wiberg (bass) and Tobias Strandvik (drums) hold down a locked in groove while the guitar of Thomas Juneor Andersson churns out the riffs. Vocal duties are shared between Wiberg and Andersson which makes for a nice mix and extra engagement for the audience.

Undoubtedly, Kamchatka are a solid group of musicians and with seven albums under their belt they have a wealth of material to draw on for this brief opening set. As they perform tracks from latest studio release ‘Hoodoo Lightening’ they’ve clearly got a stride on and are enjoying the set. However, there are a couple of moments where the audience gets a bit disconnected as the music takes on a few tangents. The meandering prog like quality seems to lose its way at the mid-point of the set before recapturing the crowd’s attention for the closing numbers. All in all, a strong opening act but perhaps hampered by sound issues and not necessarily choosing their strongest tracks to make their mark.

Next up is Graveyard. Upping the sound texture with a four-piece line up, these guys are looking to continue on the finer points of the opening act. With the venue now considerably fuller than for the first act, it’s clear that there is a strong contingent of Graveyard fans in attendance. There are pockets of people singing along and cheering appreciatively when particular tracks are played. However, there is still the overhanging sound issue from before at play. Particularly the vocals of Joakim Nilsson are hard to pick out although he is clearly singing with passion. As a band they present a united sound with a powerful groove and foot stamping riffs. They’ve crafted a number of tracks that dynamically shift and build to crashing crescendos, thankfully this is not lost to acoustic issues and enables the crowd to engage more.

Much like Kamchatka though, Graveyard’s music also allows room for artistic expression; the melodies weave with the riffs and form a new direction. This is perfectly fine to do; however, it’s not limited to one or two tracks but rather seems to form part of their live identity. These tangent jam-like interludes although executed with musical professionalism, leave the audience a little lost. There are periods of disengagement from the audience as the band appears to go full self-indulgent. This is a shame because when they deliver the riff hitting numbers then the whole crowd is moving and joining in.

With the closing of Graveyard’s set, the venue is now largely full, this has enabled a number of the acoustic issues to be partially resolved as to be expected. As the houselights dim and Clutch take the stage an appreciative roar erupts from the audience. With the first chord ringing from Tim Sult’s guitar it’s obvious that this is a Clutch crowd. Launching into ‘Gravel Road’ followed by ‘Willie Nelson’ the crowd are fully invested in the groove that the four-piece are providing. By the time of their third number ‘Gimme The Keys’ the band themselves seem to have found their stride and are loving every minute of the set. Vocalist Neil Fallon switches between guitar and straight vocals. This allows for the textures of tracks to be altered as well as providing him with the freedom to strut and stalk the stage when not playing the guitar. His engaging vocal delivers and gestures as he points to the crowd pulls people even further into the Clutch performance. They’ve overcome the sound issues that overhung the previous two acts and the crowd are fully invested in the riffs and rhythms on offer.

It’s a well-known fact among Clutch fans that the band very rarely will play the same set list twice in a row on any tour. That’s what makes it so intriguing as you genuinely never know what they’re going to play. This means that certain songs do end up receiving an explosive reception as people are always hoping to hear their favourites. Notably this happened with ‘X-Ray Visions’ and ‘Quick Death in Texas’ both taken from the widely acclaimed ‘Psychic Warfare’ album. Without seemingly pausing for breath at any point the crowd are leaping about and singing along word for word to both tracks. This type of reaction is not an isolated case, fan favourite ‘The Regulator’ and ‘In Walks Barbarella’ from the latest album receive the same treatment. Then when Per Wiberg from Kamchatka joins in on keyboards for ‘10001110101’ there’s a fully electric energy to the crowd as they all join in with the chorus.

The groove provided by bassist Dan Maines and drummer Jean-Paul Gaster provides a colossal back drop to the chugging riffs of Sult and vocal power of Fallon. They’re a slick, solid four-piece with a well-honed style and on this night, they deliver it to the full. Everyone within the crowd is moving in some way and fully drawn in to the sound. With the encore comprising ‘Electric Worry’ and the newly released cover of ‘Fortunate Son’, Clutch have delivered a well rounded and driving set. The crowd clearly enjoyed the night all the while head-banging and foot-stomping their approval throughout. It will be interesting to see what other changes are made to the set over the coming days, but it’s a pretty sure guarantee that no-one on these UK dates will be leaving disappointed.