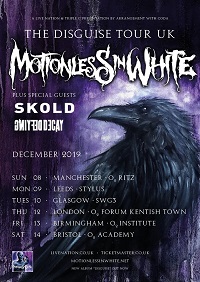 Attending this show, I wasn’t sure of what to expect from Motionless In White’s stage show this time around, although it was bound to be impressive. Many people within the line waiting to get in spoke of what they thought the support bands would be like and said they hadn’t heard of either of them before. When the line got moving and people were finally allowed into the venue, people scurried to get as close to the barrier as they could.

The first band, Defying Decay, came on stage member by member and eventually there was seven people on the stage playing, which certainly was a shock to the audience. It was sure that they didn’t expect to see several members onstage playing metal rap with a fusion of electronica/drum n bass. Although throughout the bands set there was audience interaction, such as waving phone lights, clapping jumping and other usual fan movements there was still a true feeling of disconnect between the band and the crowd which was unfortunate considering how talented the band is. For one of the guitarists they repeatedly faced issues with their pedalboard having a technician come on stage at multiple points to try and help settle the issue, until eventually it was resolved.

Midway through the set the band announced that they will be playing a cover of a Linkin Park song which was ‘Faint’ and that was taken to by a lot of the crowd incredibly well. At one point in their set the bassist had come down from the stage up to the barrier, he even made his way over the barrier and into the crowd in the attempts to start a circle pit -even though it could have happened due to the style and intensity of the music, it just wasn’t happening unfortunately. The band had such intense energy on the stage with everyone completely getting involved in their role in the band and every member had exceptional talent on their instrument.

Sköld saw the lights in the venue go dim as a very robotic person came to make his way to the keyboards/synths-  which lead the audience to ask one another what type of act they feel as though they may be seeing come to the stage next. The keys player had an interesting move as they would often lift the keys off the stand slightly and swing it back and forth before returning to a static pose. Tim Sköld made for an incredibly entertaining frontman to watch as he would often parade about the stage in a marching manner, either cradling his guitar in his arms as he walked or having it proudly outstretched before returning to a cold stance behind the microphone.

There was a strong industrial feel to the sound of the band although it certainly captured a lot more people’s attentions and had them more invested in what was happening on stage. One song that had many people in the audience jumping and for those who knew it, screaming along, was ‘Small World’ which had a chorus that got people dancing to the grooving industrial song. The way Tim sung particular words had an impressive growl to them, adding a very twisted depth to the sound of their music.

The lighting for the set was mostly floods of green or purples as well as the occasional red which added to the haunting dynamic of the act, as well as really boosting the industrial feel. At no point really could you see the drummer onstage due to how dark the back of the stage was although it wasn’t a particularly big deal as so many people were caught up on watching Tim. Overall the bands performance was incredibly captivating and it seems as though many people within the audience took to the act well.

The stage was dark as the introduction for ‘Undead Ahead 2’ played in the background as the crowd chanted several different things. Suddenly all of the noise from the audience came to what felt like a stop as the band members walked to the stage, then an uproar of screams took over the room. The room was a constant scream of noise, singing the words to the songs as the band continued to run around the stage playing their songs. Motionless played a series of older songs and newer songs varying from ‘Devil’s Night’ off of their second album, ‘Infamous’, to, of course, songs off of their recent release, ‘Disguise’. Singer Chris had also mentioned whilst he was on the stage that any of the newer songs they were playing had a really good reception with people screaming the words back so he was impressed.

The energy onstage was at an incredible high with the band members moving around at all times and if they were standing at one specific place for long, it wouldn’t take much time for a breakdown to come and for the members to be head banging again. Songs such as ‘Reincarnate’ and ‘Disguise’ had a really good reception with multiple people head banging, jumping within the crowd as well as crowd surfing during them. Many points of the night saw crowd surfers making their way along the top of the audience, although many also failed to make it to the barriers due to being dropped. The crowd was very full and surprisingly there wasn’t really a mosh pit – at least to what I could see – happening at any point for too long, even though the crowd was incredibly rowdy at some points, being unnecessarily mean to some people by hurting people to get past.

The stage setup was incredible with the drums on a very high riser and there being a platform for the guitarists to walk along that the drums were in the middle of. When both guitarists, Ricky Horror and Ryan Sitkowski, would play on the risers it looked almost as if they were stored within a cabinet as puppets, as  they had a specific place to stand which looked very impressive and allowed the stage to have a bigger dynamic to it. There was always at least one member from the band on the move at all times and even though drummer Vinny Mauro was hidden behind a drum kit, he still got his spotlight by performing an incredibly impressive drum solo which shocked many audience members especially when he came to his double kicks.

Various songs from the evening had sections where the audience were able to have their own sing along sections where Chris would take out his in ear monitors just to be able to stand and listen to the crowd better as he holds the microphone pointed towards the vast sea of people. During the song ‘Final Dictvm’ the band invited back to the stage Tim Sköld and he sung verses of the song with Chris which was certainly an interesting watch, as during particular sections they would come together and do small dance movements which were synchronised with one another. The way the band interacted with one another as well as the audience members was certainly entertaining to watch, and Chris certainly knows how to capture the attention of the audience.

At many points in the night guitarist Ricky kept making eye contact with people in the crowd before throwing them a guitar pick until he unfortunately had nothing left to give to the fans. Also, during one song Ricky took over on doing vocals for a bridge section which had many people within the audience staring at the guitarist in awe of the beauty from his voice. The overall musicianship of everyone within the band was incredibly tight and it didn’t seem as though anything was at a fault. Unfortunately, before the show, a stagehand had broken one of the band’s stage props, which was a light, so the performance surely would have had more to it had the lights been there. That was the only real fault to the show  – which wasn’t even in the control of the band.

The band had called the set to an end after playing their song ‘Devil’s Night’ but the crowd demanded an encore so Motionless came back to the stage and played ‘Eternally Yours’. Chris made the effort to throw roses out to the crowd during the beginning of the song. At the first chorus of the song, confetti shot out from above the audience and rained onto them, whilst various crowd members made the attempt to catch a rose off of Chris. The full performance of the song was intense in the best way possible, with the guitarists running around the stage and head banging as the lights shone a bright mix of blues and purples out to the crowd, lighting up the faint silhouettes of band members as the audience tried to see past the flow of confetti. The lighting the entire night was intense and certainly enhanced the performance to a really high degree, with them being a mix of reds as well as blues and greens for the majority of the bands set. Overall the bands performance was at a complete peak and it didn’t  seem as though there was any room for improvement or requirements for change –  as they really have managed to develop both their sound and performances to melt into what they want to be as a band.

There was a lot of buzz when people walked away to leave the venue, many people were in shock of the amount of energy which had been put into the performance by Motionless In White as well as discussing what their favourite songs were of the evening. Overall the night was a strong mix of bands and performances which all certainly held their ground strongly and made for a really enjoyable night of performance.