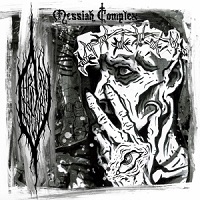 “The Band Is Dead! And with it the idea that an extreme music act has to have a typical structure is subsequently also dead.” That is the basic assumption expounded by the enigmatic Jamie Christ, the blackwork tattoo artist behind this self-styled “introspective death industrial multimedia project”. And, in a way, he is right as, given the capabilities of modern technology, and as has been proven on multiple occasions, it is possible for just one person to create a sound, a feeling, an atmosphere, that previously would have required an entire group of individuals to evoke and produce, with that person drawing on the resources and skills of other likened minds only as and when required, or relevant to the project concerned.

Christ (it’s somewhat ironic that I am writing this review on a Sunday afternoon, with an open-air church service in full effect just yards from ÜRHQ) describes his project as “not just an act playing shows but an always changing and shifting art form, art rooted in extreme music, sadness, and depravity”. It’s a bold assertion, one which it could be argued is reflected in the title of this, the resultant debut album from a man who previously has found solace within the traditional band format which he now has chosen to eschew in favour of creating his own very personal vision of where he wants to be and where he wants to go.

‘Messiah Complex’ is a chaotic conundrum of an album, filled with dissonant sound clashes that crash and cascade off, in and around one another with apparent disregard for any sense of clarity or cohesion. Huge walls of distorted noise crash into you with the force of an unrepentant sonic tsunami, their rawness and visceral vibrations endorsed by their sheer primality. Spoken word samples, many of which talk over each other, are counterpointed with dark screams, while off-tempo hi-hat interjections add to the sense of abnormality and disparity. At the same time, you cannot help but de drawn into the album’s hellish depths, surrendering your soul to the experience – even if, all the time, you feel repulsed by the cathartic, cataclysmic atmosphere in which you find yourself engulfed. It’s an album which truly reflects the chaos inside its creator’s head, and one which sees him confronting his internal demons full on and in the glare of that chaos’ reality.

With Christwvrks being a multimedia project, there is a sense that this is only one small element, in which we have been presented with an part of the puzzle which does not actually work in isolation from the other constituent media; that you need to embrace the overall experience in its totality in order to garner the full effect. And that is why ‘Messiah Complex’ doesn’t quite work: it needs to be encapsulated and incorporated into the wider project, instead of sounding like listening to a horror movie while the screen is blanked out. Outside of that, however, it is possibly a work of grotesque, insane genius.