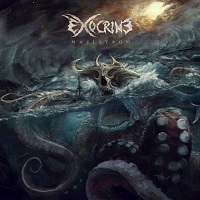 French tech-death metallers Exocrine are savvy enough to know that there’s more to standing out in their genre than dizzying masturbatory displays.

Of course, there are plenty of virtuosic feats of prog metal madness on their fourth full-length, ‘Maelstrom’; but there’s a nuanced approach to Exocrine’s songwriting that superbly balances the savage aspects of their music with bursts of cathartic grandiosity.  Folks that related to the accessibility of recent releases from Cattle Decapitation and Rivers of Nihil will likely find this record to be an equally satisfying listen.

Just as 2018’s ‘Molten Giant’ was centred on all things Lovecraftian and Kaiju, ‘Maelstrom’ traverses similar lyrical terrain.  These lads clearly have a fondness for all beasties mammoth and mythical.  The aforementioned musical balance reflects the album’s conceptual focus, with the more traditional extreme metal elements aptly depicting the monstrosity of the subject matter, be it blasts of grindcore, slamming death metal riffs, pig screams or intestinally affecting gutturals. As accomplished as Exocrine may be when it comes to the staple tropes of the genre, the instrumental representation of the transcendent, rising grandeur of the behemoths in question is handled with exquisite intricacy.

It’s these moments that allow for the band to step beyond any potential limitations and create footholds for those dipping their toes into more extreme waters.  The title track’s melodic refrain drops unexpectedly, and yet is tastefully employed within the context of the song.  However, it’s unsurprising that the most captivating elements are when Exocrine move well beyond the parameters of brutality and allow cinematic expansiveness to take the fore.  The jazz flourishes on tracks such as ‘Wall of Water’ or ‘The Wreck’ manage to seem both free-form and intentional, while the rising splendor of ‘Galactic Gods’ makes for a staggering closer.

Looks like another winner for Unique Leader Records then.