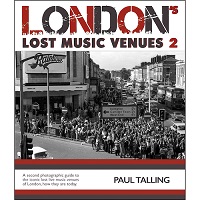 Back in 2020, Damaged Goods Books published the first volume of ‘London’s Lost Music Venues’, London historian Paul Talling’s fascinating journey through time compiling well over a hundred lost London music venues. Being published during the initial lockdown, it was a timely reminder of what music fans had already lost at a time when those venues we still had faced a very uncertain future. Now Talling is back with the second volume, this time focusing primarily on the larger venues that have been lost in the mists of time, whether decades ago or more recently, plus a fair few more smaller venues that didn’t make it into the first volume.

Split into sections covering Central/East/North/South East/West and South West London, each venue listed includes pictures, a description of what happened there in its heyday, what fate it succumbed to and most interestingly, lots of posters, flyers and press ads of the gigs they put on.

Legendary big venues such as the Rainbow in Finsbury Park, the Odeon in Lewisham, the Earls Court Exhibition Centre, the Hammersmith Palais, the Astoria and the LA2, the Kilburn National and the Lyceum are all venues that were on the touring schedule of major bands for decades and are all venues that hold special memories for music fans through the years, not just the ones that lived in London. I for one could reel off a whole host of classic gigs I’ve seen in those venues.

Then there’s the ones that didn’t last too long such as the London Arena, the Bottom Line and the Ocean in Hackney, or the big but obscure and ‘just not quite right’ ones such as the Michael Sobell Sports Centre in Finsbury Park, where I still recall seeing the basketball hoop behind the stage the only time I saw Rainbow, and also the site of a pitched battle between punks and mods when The Jam played there on the same night The Exploited were down the road at the Rainbow.

The list of clubs, pubs, ballrooms and theatres that once regularly hosted live music is huge, and the fact that they have all gone is pertinent, particularly to those of us that live and love our live music. Yes there’s still plenty of venues about, but as this book illustrates, only a fraction of the amount there used to be. What is particularly depressing, and perhaps a comment on the social history of recent decades, is what happened to these buildings: The Empire Rooms/Embassy Rooms (Spearmint Rhino Strip Club), Kilburn National & The Rainbow (both Universal Church of the Kingdom of God), Turnmills (office block), Astoria/LA2 (Crossrail), Lewisham Odeon (demolished for road widening scheme), Blaises (where Yes first cut their teeth – vacant land used as a makeshift car park). The list goes on with so many venues now office blocks, gyms, shopping centres etc.

Two closer to my heart I spotted were the Roxborough in Harrow, the venue where I played my very first gig, demolished for a new road layout and office block, and the Hammersmith Palais, where three generations of my family danced the night away – my grandparents to the orchestras of the day, my parents to modern jazz, and then me to the likes of The Ramones & The Cramps. That’s real social, family and community history wrapped up in one building. Now its student accommodation and a gym.

The gig ads scattered throughout the book are worth the price of admission alone – fancy The Specials with The Selecter and Dexy’s Midnight Runners at the Lewisham Odeon? Or Joy Division with Killing Joke? How about Slade with U2 and Discharge in support at the Lyceum? (yes, really). Of course whilst this book is about lost venues in London, it’s relevant to towns and cities all over the country with the same story and makes a fascinating read for anyone with an interest in the history of live music. It’s a handy size and a book that you can dip in and out of for hours on end. I’ll certainly be looking to get my hands on the first volume now and can’t recommend this one highly enough.