Blind River – ‘Made of Dirt’ (Self-Released) 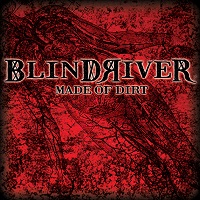 If ever there was a year for good times rock ‘n’ roll, 2020 would be it. While the world burns loudly outside, sometimes its good to just find a record that taps into a base desire for a good dance and sing – and if that’s the kind of thing you are seeking out, Blind River are your band. ‘Made of Dirt’ continues the journey the band first set out on their self-titled debut, drawing on a mixture of 70s and 80s hard rock greats to evoke the same sense of grease-and-grit that prevails over the pantheon of classic rock.

Recorded over four days at The Old Chapel Studio in Chichester, ‘Made of Dirt’ has production standards just raw enough to capture the sweaty nuance of a good club gig whilst not losing any of the musicianship in the process. In turn, this helps to communicate the inherent live-basis of the band themselves, each song feeling well-worn but crucially not tired, managing to avoid some of the more obvious pitfalls that claim similarly nostalgia-minded bands. More The Answer than Rival Sons or Blackberry Smoke, Blind River have a strong motor at the core of their songwriting that pushes each song away from ‘dad’s lazy Sunday afternoon’ to ‘front row on a Friday night’.

‘Waste of Life’ kicks things off with the band in full-swing, a chunky guitar riff dancing nimbly across the track’s three-and-a-half minute runtime as a portent of things to come. Speedy, moshable rock music is the order of the day, delivered with enough panache to recall rock’s lofty ambitions whilst never reaching too far from the gutter to fall foul of coming across a little too glam or radio. The band’s foot isn’t always on the gas either, mind. Slower tracks like ‘Acid Tongue’ and ‘Gone’ soak up the southern rock sunshine in a way not entirely dissimilar to Orange Goblin, though without the sheen of fuzz these can come off as admittedly less imbued with Blind River’s own personality. That said, if you’re a big fan of stompy, slower yowl-alongs, the chorus (and accompanying breakout instrumental) of Acid Tongue will go down nicely in a Scissorfight, (slower) Clutch or The Showdown kind of way.

Blind River don’t hitch their horse to any one wagon and feel stronger as a result. Rather than aping any one particular style, the band draw on enough disparate sources that their music is imbued with the better points of classic rock whilst not being entirely beholden to its trappings. A big part of this is in the band’s ability to communicate their own sonic identity – in a world where dozens of like-minded and identikit sounding bands can appear on Spotify, YouTube, Bandcamp (etc. etc.), the ability to deliver music enough personality to truly assert the artist is paramount. Blind River achieve this admirably on ‘Made of Dirt’, each song roaring to life with enough vitality that it sticks the landing each and every time, not reinventing the rule book but by scrawling its name in the pages and pleasing fans in just the right way – sometimes that’s all you can ask for.