Bleed From Within – ‘Fracture’ (Century Media) 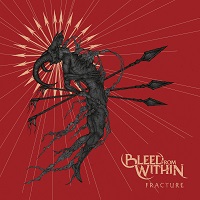 Glasgow’s Bleed From Within are a force to be reckoned with on the modern metal scene – brash, raw, and incredibly fierce, they’ve been making their presence felt for a while now and they’re about to drop ‘Fracture’ as the latest addition to their pretty solid discography and I’m about to try and get across why this album should be given a spot in your library.

I first came across these guys at UK Tech-Fest back in 2018, if you didn’t see them absolutely smash it then you most definitely will have heard them because that show was loud as fuck. I mean even if you’re only halfway familiar with them, you’d be well aware that Bleed From Within are all about those frantic riffs, laden with tapping and chugs that go hard that whip their crowds into an absolute frenzy.

‘The End Of All We Know’ is a stellar example of a song that switches back and forth between just being facemeltingly heavy to a chorus that is straight up epic – you want a song that gets you headbanging so hard that you think you’re going to get whiplash but then also cranking your head back to scream the chorus? That’s the lead single from this album in a nutshell – spiffy.

Bleed From Within doesn’t really stick to a specific formula though with these songs, ‘Pathfinder’ is a non-stop chug fest, pure rage in a song which is followed up by the next single from the album, ‘Into Nothing’ which just goes for a heavy, stompy rhythm. I could easily see your average sweaty long haired mosher just full on air-guitaring with hair that looks like cousin it from The Addams Family being frantically swung around, that short solo is killer too.

It’s hard to pick out one specific influence that goes into the songs on this, they’re extremely well blended and the outcome is Bleed From Within’s expertly crafted technical riffs that don’t detract from the relentless hammering of the rhythm, ‘Fall Away’ does a good job of showing this off, bits of metalcore, tech-death, thrash, even just good old fashioned heavy metal, it’s all in there.

The album’s title track ‘Fracture’ comes off as quite proggy in how intense the riff technicality it is, jumping between chugs, arpeggios and shreds within seconds of each other which reminds me a lot of the sort of thing you hear in stuff by Monuments or Periphery. The main chorus riff in this song is fucking filthy: I’m sat here typing this with a full on gurn on my features. Ithink I’ll need a cigarette after that.

‘Night Crossing’ (previously featured in our Singles Club) comes off as a bit more of a melancholy one? Hard to place, something about how those sorts of melodies that sing over the top of the main riff makes it sound often quite high and lonesome, the solo further accentuates this. Immediately following with ‘For All To See’, we’re straight back melt-your-face city with a bit more of a straightforward rhythm but that guitar work is just slick. There’s something about the tone these guys rock that means every single little nuance of their sound shines through, every chug is felt along with the drums.

‘Ascend’ has a return to the epic singalong chorus style, and what a chorus it is, it’s big, it’s uplifting and man it’s got a catchy hook to it too, superb stuff. ‘Utopia’ brings me back to my full on gurn face, that opening riff just oozes style, and it just keeps going! This one is really standing out for me for my album favourite next to ‘Fracture’; I could say that i’m a sucker for a dirty riff but I feel like I’d be doing the album as a whole a disservice, since it’s literally just chock full of dirty riffs.

We finish on ‘A Depth That No One Dares’ – definitely feels like an ace in the hole because this ones quite a fair bit different in tone to the rest of the album, there’s so much atmosphere in it and especially that busy tapping on the guitar during the chorus before the drop into the bridge genuinely makes me pine for the moshpit that at the time of writing this is still so far away.

Seriously though, if intensely melodic yet just outright heavy is your thing, then you owe it to yourself to get your ears around this, Bleed From Within are definitely worth it.