Judicator – ‘Let There Be Nothing’ (Prosthetic Records) 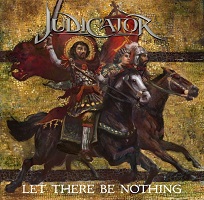 Galloping guitar riffs, soaring vocal lines and catchy melodies. Three key components for a power metal engine. For their fifth album release, Judicator have got it all. ‘Let There Be Nothing’ follows their previous releases in having lyrics steeped in historical storytelling, this time going into the life of Byzantine General Belisarius. Couple the concept with technical proficiency and solid hooks, then the eight tracks on offer are offering some quality power metal.

Opening with a layered vocal harmony with acoustic accompaniment, ‘Let There Be Light’ is the first track on the album. As the lyrics provide the historical backdrop for the intro, the whole band kicks in with aforementioned galloping riffs backed up by a driving rhythm section. The hook is immediate and pulls the listener in. The urgency of the tempo lends weight to the lyrics as they cut through the mix with a high octave range. Dynamic shifts, layering and high energy are the order of the day and this does not let up as the album moves onto ‘Tomorrow’s Sun’. This track opens with a solid guitar riff accompanied by a Maiden like bass line providing the thickened texture. The chorus section has a catchy as anything call and response sequence that would definitely work well with a live audience (whenever the opportunity next presents itself).

Even after two tracks, the album has a very distinct formula and the groove is firmly set. The song-writing is excellent and has the hallmarks of a band that have been working their genre for a while. Allowing for the fact that they have had a number of line-up changes and each musician has had to record remotely owing to a geographical dispersal across the US. They’ve certainly got a distinctive element while still incorporating all the trademarks of power metal. They’ve established an epic stance, not just based on the musical composition but also by taking on conceptual subject matter. They’ve penned several standout numbers on this album in the likes of ‘Strange to The World’ with it’s multi layering and sweeping dynamic changes. The melodic guitar solo is particularly well crafted. Through to ‘Amber Dusk’ led by a brooding riff that opens out into a full band galloping charge before returning to a down tempo intensity for the outro.

Then there’s the title track closing out the album. The intro to which is a staccato marching beat that draws the listeners initial interest. It then morphs into a NWOBHM like melodic head banger friendly groove. The song-writing is shown off to great extent with this particular track as all the aforementioned elements such as the textured layering, dynamic changes and tempo shifts are mixed together with the story telling lyrics. Executed with the excellent musicianship that has been displayed throughout, it really rounds out the album and effectively brings the epic narrative to a close.

‘Let There Be Nothing’ achieves all the power metal targets for Judicator. To some, these eight tracks may come across as a little paint by numbers in this regard as there is an evident formula. There are the high energy moments, the reflective changes, the fist in the air and air guitar friendly sections. They’ve got the standard big sweeping mix that encapsulates all the instrumentation and builds a framework allowing for the high octave attack of the vocals to cut through. While it is so obviously power metal, it may well turn some people away after the opening of the first track if they themselves are not fans of the genre. The crucial point here is that this is not an album for people who don’t like power metal. For anyone who is a fan of the genre, then this album will fulfil everything that you like about it. Yes, they’ve got a pattern that can be predictable at times, but they execute it really, really well. It’s catchy and memorable and the musicianship is first class giving Judicator an edge when it comes to other power metal bands.