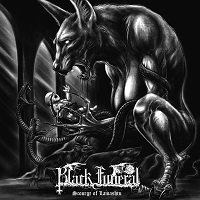 Black Funeral were founded in 1993 by Michael W. Ford, who performs under his magical name Akhtya Nachttoter. Over the years he has since went on to become the author of more than 25 books in the occult and Magick. As well as being a musician and author he is the current magus over the Black Order Of The Dragon and has been involved in the black metal scene for more than years.

Despite the numerous line-up changes over the years since the inception of Black Funeral, in that time they have had a respectable amount of releases under their belt. With three demos, two EP’s and nine full-length albums, we are about to see the release of their tenth full-length album just around the corner entitled ‘Scourge Of Lamashtu’. The band have been a little quieter though this past decade as this will be only their second full-length album since 2010’s ‘Vukolal’, the previous being ‘Ankou And The Death Fie’, which was released in 2016.

Onto the album itself and what you can expect from it. ‘Scourge Of Lamashtu’ features a lot of the common traits that have become synonymous with Black Metal music over the years (not that that is a bad thing). The raw lo-fi recording, the unconventional structures with heavy distorted guitars and tremolo picking are all there, but the album is more than just that.

Most of the tracks on the album are introduced and come to an end with a piece of dark ambience. From howling winds, animalistic growls to ritual drumbeats, these all add to the already cold, dark and eerie feel to this album.

The addition of keys to several of the tracks are also a nice touch. Adding keyboards can sometimes make things sound too polished, but, in this case, they do nothing but enhance the album’s already dark atmosphere.

Even though Black Funeral have been going for over two and a half decades and long gone are their pioneering days of the mid to late Nineties, with this release they prove that musically and creatively, they still have plenty to offer and continue to secure their legendary status in American Black Metal. Get this, but only if your soul is black enough.