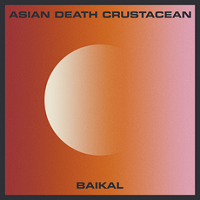 In life, we often tend to get into comfort zones of what we find normal. Sometimes we get stuck in those comfort zones like a rut. We may not be necessarily ignoring the world around us we may even be aware of what we are missing, much like how a person can live in a place their entire lives and not ever get around to seeing the famous museum just down the road. When you finally have a reason to get out of that rut we can discover something we had not ever truly considered. In these situations, I find that the reward of discovering is as good as the discovery itself. ‘Baikal’ had that feeling for me.

The press info I was sent describes Asian Death Crustacean as experimental metal. My gut kept wanting me to nail it down to something more concrete, but I can’t seem to figure out what it would be. I think if you really wanted to debate it you could argue that it is not metal at all but if it is not metal then what is it? It brings forward a lot of the same emotions that I feel with ambient but also holds more of a structure than I have come to expect from ambient. Also, I don’t expect electric guitars in ambient most of the time either. Especially not this heavy at times. I guess all of this was to say that this is a newly blazed trail. Sure, I have heard similar before but like the local museum I never really paid much attention. While Asian Death Crustacean might not be the first to blaze the trail I would say they are an early traveler of it and I think they will be an early standout example of what will eventually be its own genre with a more descriptive name than experimental metal. That could mean anything.

There are no vocals on this album but that does not mean that it does not tell a story. Every track evolves over time from beautiful clean tones out to harder angrier tones that drive your emotions over time. This is a master class on how music and subtle changes can drive emotion and in the end, you have that feeling like you were just on a journey or that you were just told a great story even though nothing has been said. It is quite an experience.

‘Baikal’ is worth the price of entry just for the emotional experience alone. You can’t help but get caught up in it. For the analytical mind, there is a lot to digest on abstract emotion in music. For the people who just want to enjoy the ride, this is a great album for that too. There is something in this for everyone. You owe it to yourself to pick it up.