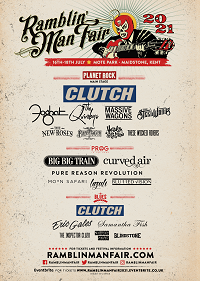 Ramblin’ Man Fair have confirmed the first acts for the 2021 iteration of the Maidstone-based weekender.

Fulfilling their promise to bring back as many as possible of the acts which were booked to appear at this year’s Fair, before it had to be cancelled, the organizers have confirmed that Clutch will appear not once, not twice, but three times over the course of the weekend.

As planned for this month’s event, the Maryland heavy blues groovers will perform on each day of RMF – headlining the Main Stage on the Friday night and the Blues Stage on the Sunday, with a “Doom Saloon” semi-acoustic set, also on the Main Stage, sandwiched between on the Saturday afternoon.

Also confirmed for next year’s event, which will take place once again at Mote Park in Maidstone over the weekend of 16-18 July, are country rock legends Foghat, who will be making their first live appearance in the Uber Kingdom in almost 50 years, and Big Big Train, who will headline the Prog Stage on the Saturday.

Other confirmed Main Stage acts include perennial festival favourites The Quireboys and Massive Wagons, as well as The Steel Woods, The New Roses, Bad Touch, Hands Off Gretel and These Wicked Rivers. Attractions on the Prog Stage will include veterans Curved Air, alongside Pure Reason Revolution, Moon Safari, Lazuli and Blurred Vision, while Eric Gales, Samantha Fish, The Inspector Cluzo, Connor Selby and Blindstone will all appear on the Blues Stage. Further acts obviously remain to be announced.

Tickets purchased for this year’s Ramblin’ Man Fair will be valid for the 2021 event. Additional tickets are available HERE.