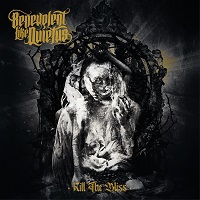 Imagine if Andrew Eldrich, Carl McCoy and Wayne Hussey had joined forces, built themselves a Tardis and transported themselves through space and time from Thatcher-ravaged Britain to the sunnier climes of modern-day western Canada, while still maintaining their grim outlook on life? You can’t? Well, fortunately, you don’t have to, because Calgary’s wonderfully named Benevolent Like Quietus have just conjured up such an aural vision (yes, I know that’s a contradiction in sensual terms) with this, their excellent debut album.

‘Kill The Bliss’ – and I don’t think it’s an invitation to assassinate a certain rather irritating female American wrestler – stampedes (sorry) out of the blocks like a rampaging bull with the smell of a wounded matador filling his flaring nostrils, recreating the eerie gothic mysticism of the Sisters, the Nephilim and the Mission with unerring accuracy and evoking imagery more suited to the industrial back alleys of Lancashire than the wide open prairies of BLQ’s native Alberta.

Over the course of its 11 tracks, ‘Kill The Bliss’ delivers solid, traditional, old school goth rock, driven by deep, doomy bass lines and broiling guitar melodies, topped off by Daniel Louden’s rich, dense vocals, which lie somewhere between the aforementioned triptych of goth gods, the late Peter Steele and, if you can imagine it (yes, we’re asking you to use your imagination a lot with this album), Tomi ‘Mr Lordi’ Putaansuu. It’s an album epic in its scope, yet succinct in its delivery (it clocks it at just short of 46 minutes in total), while at the same time echoing the ambition of its creators.

There is one serious question mark to be applied to the album and that comes at its midway point: and that is whether the world seriously needs yet another cover of ‘Mad World’. The answer, unfortunately, is NO. Not only is it a very mediocre version, with Louden’s attempts at death growls grating on the ears in comparison to the sub-industrial musical reinterpretation, but it also totally destroys the momentum which the album has built. Fortunately that momentum is quickly re-established with one of the album’s highlight tracks, ‘Where Dead Hearts Reside’, which is positively venomous, from the acidic guitar riff to the sheer spitting fury of Louden’s vocal delivery.

Overall, ‘Kill The Bliss’ is a highly accomplished album, one which inhabits the darkest corners of the most febrile of gothic minds, dark and dense yet exploding with energy and life, accomplished and mature and capable of standing alongside the dust-coated shoulders of the genre’s finest exponents.