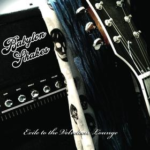 Babylon Shakes unleashed half of this album on us almost a year ago but have now added five more songs to create a debut full length that turns the calendar back over 30 years ago when the likes of Faster Pussycat, LA Guns and Bon Jovi were featured in countless magazines on the newsstand. If you solely want something that is stretching musical genres or creating new genres, this album is not for you. If you want a sleazy rocking trip through the gutters with songs that feature choruses designed for audience participation, I cannot recommend this enough. This seems to be a great time for sleazy hard rock with the sudden emergence of American Jetset as well as bands like the Cruel Intentions, Hardcore Superstar, Reverend Backflash and the re-emergence of bands like Tora Tora and Jetboy.

Babylon Shakes heavily pursue the back alleys where vintage Faster Pussycat roamed, and there are times where the resemblance is rather uncanny from the musical approach to Chris Clark’s vocals. New song ‘Making a Million’ storms out of the gate with guitars wailing and drums being beat into submission. This contains heavy elements of ‘70s era Aerosmith with a huge chorus where the musical culture of today is sadly laid bare where bands are either making a million (few) or sweeping the floor (most). ‘Sunset Striptease’ takes us back to the original EP with its glam romp crossed with a dose of Hanoi Rocks and some Faster Pussycat inspired guitar riffs. The chorus hits hard, and the guitar solo fits the song perfectly. ‘Sin Parade’ features a sleazy blues beat and riff that sounds like a cross between Faster Pussycat’s ‘Little Dove’ and ‘Hollywood Vampires’ era L.A. Guns. The mix and production on this album are terrific with the instruments sounding crisp and audible; nothing has seemingly been lost with the drums (Jeff Mortimer) especially having a live feel. The band add a third new one in the first four songs with ‘No Pictures Please’ being another winner. The backing vocals here add a really nice touch, and this would have been a smash single in another era.

The band close the first half of the record with their video from the first EP, ‘Velveteen Libertine.’ As much as I like the song, it’s not one of my favorites from that first EP. ‘Silver Tongue Devil’ also comes from the first EP and hits perfectly as the opener to the second half of the album. The driving groove nailed down by Mortimer and Dave Elmore (bass) is rock solid with the guitars by Clark and Gary Jordan given plenty of bite in the mix. The band offers up a new song in the straight ahead ‘Hard Times’ featuring some nice guitar riffs. The backing vocals in the chorus sit back slightly in the mix, which really make them even better on this sleazy fun song. The album returns back to their first EP with the great ‘Die Pretty.’ Designed with a simple chorus that people can sing the second or third time it appears along, the band combine it with a hard rocking beat and some nice fills by Mortimer to add even more character to the song.

As the album starts to reach its end, we get a total curve ball with the acoustic ballad ‘Star in Your Eyes’ showing an entirely new elements to the band. Clark’s vocal performance here tones down the Taime Downe inflections and really hits all the right spots. The easy going beat provides a great contrast to the sleazy rock from the rest of the album with the band also employing their most complicated chorus to sing so it takes some plays to get these words right each time. In the world where Cinderella had a massive hit in ‘Coming Home,’ this one would have reaped the same reward. Perhaps, this world can get shaken up a bit so this one could find its way to the mainstream. ‘Motel Lights’ serves as a familiar finale as it closed the initial EP too. This five-minute rocker shakes the gutter, pounds the curbs, and sounds like it would be at home blasting out the speakers of a Trans Am.

Stars seem to slowly be aligning in the gutter for a re-emergence of sleaze rock in terms of popularity, especially with the quality of albums that are being released. Babylon Shakes show the magic of the genre with these ten songs reminding me of the glory days of the Sunset Strip, but, more importantly, they also sound fresh and current to this chaotic world. This album shoves those worries about the world to the side and lets the listeners focus on getting their rocks off.