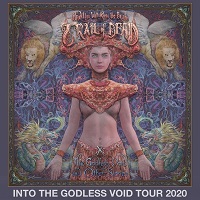 The trip back across to Manchester has the rather distinctive art-rock tinge of …And You Will Know Us By The Trail Of The Dead as its reward this evening, with Our Favourite Enemies frontman and advocate Alex Henry Foster presenting the seven-piece ensemble for his personal project as our only support for the evening. A short walk from Piccadilly station later, I arrive at the sold-out venue to an already very busy room before we even get the first note played, with our support act for the evening being delayed with their start.

Coming on a fair bit later than billed, Alex Henry Foster has been afforded plenty of time for his set and the hypnotic basslines are there from the very start as the shoegaze/psych mashup has all the appeal of an on form Tool and a lot of the technicality that this requires. The performance is tighter than a rather large vice fully wound in and our ears are just as held, captivated by the rather impressive almost Space Rock approach at times with it evoking mental images of travelling through the chaos of the cosmos. The emphasis, whichever end of their approach they are on, is on the rolling bass lines that move as surely as a tidal wave, dragging your head up and down as you are helpless but to nod along. Bits of trumpet add into what at times approaches a dissonant noise, though without the actual harshness that a real clash would create, relying on building layers up atop and in conjunction with the bass to create quite a musical atmosphere. An excellent support slot that rightfully gains a good level of applause.

…And You Will Know Us By The Trail Of Dead quickly showcase their abilities and different musical approaches as they take to the stage, after a rather muffled sounding opening is sorted by a prod from the band. The vocals are a touch wobbly at times, though this fits ok with the music generally, whilst the music itself is performed in a well-rehearsed manner, showing real quality of performance through the set, with their different musical aesthetics feeling like a storytelling journey of their own. The stage is a touch cramped given the five members on there, though this does not seem to hamper their performance any as they switch easily between their songs with a minimum of fuss, seeming intent on melting our faces and soothing the pain in fairly equal amounts, which we all respond to well, given the sheer quality and ability being produced in this live environment. It can be easy to forget just how experienced a live act they are, clocking in at over two decades now, though on the basis of tonight’s showing it’s hard to believe they’ve often been so well oiled as they are tonight.

Songs like ‘The Opening Crescendo’, ‘Into The Godless Void’ and ‘All Who Wander, taken from this year’s ‘X: The Godless Void And Other Stories’ work well live, with the new album accounting for around a quarter of the set and their presence feels perfectly inkeeping early in the set alongside the likes of ‘Isis Unveiled’, with them all getting a good response from the capacity crowd. The presence of set favourites such as ‘It Was There That I Saw You’ quite early in the set is slightly surprising, but as it’s placed alongside a number of the newer tracks it’s a touch more understandable, while a few of the more heavily played tracks are strangely missing from the set. With the likes of ‘Caterwaul’ and ‘Will You Smile Again?’ coming later in the set, we get to a final fan favourite in ‘Another Morning Stoner’ to see out the evening in style, with heads nodding along and a loud, appreciative applause showing a good level of respect for such a performance.