VIDEO OF THE WEEK – Amon Amarth

There really was only one contender for this week’s choice, a video which, quite honestly, stands head and shoulders above anything to we have watched over the past seven days – and that is the epic new video from Amon Amarth.

‘Shield Wall’ is the latest single to be lifted from their ‘Berserker’ album, which in itself has been acclaimed – not least by our very own Phil Cooper – as a stunning return to form by the Swedish warlords. And, the accompanying video is suitably breath-taking in both its scope and execution…

chronicles the plight of an enemy ship come to invade a Viking village. But, as frontman Johan Hegg’s guttural growl chants ‘Vikings, Raise The Shield Wall, Hold The Front Line, Fight Til Death‘, the fate of the enemy becomes uncertain. Who will emerge victorious from battle?

Directed by Phil Wallis and produced by Alexander Milas – the same team behind Amon Amarth’s 2018 feature-length documentary ‘The Pursuit of Vikings’ – the aim of ‘Shield Wall’ was to produce a historically accurate portrayal of the battlefield tactics that Vikings were known and also notorious for. Working closely with noted Viking scholar and battle re-enactor Igor Górewicz of the Triglav and Jomsborg Vikings, the video was shot on location in Wolin, Poland – site of the world-renowned annual Festival of Slavs and Vikings – and featured extras from the worlds’ foremost Viking re-enactment groups, including Triglav, Maximas von Bracey’s Ulflag, and Germany’s Blóðvítnir, friends of Amon Amarth, whose longtime member Sana portrays the story’s raiding party commander.

Amon Amarth return to the Über Kingdom at the end of November for a trio of dates: 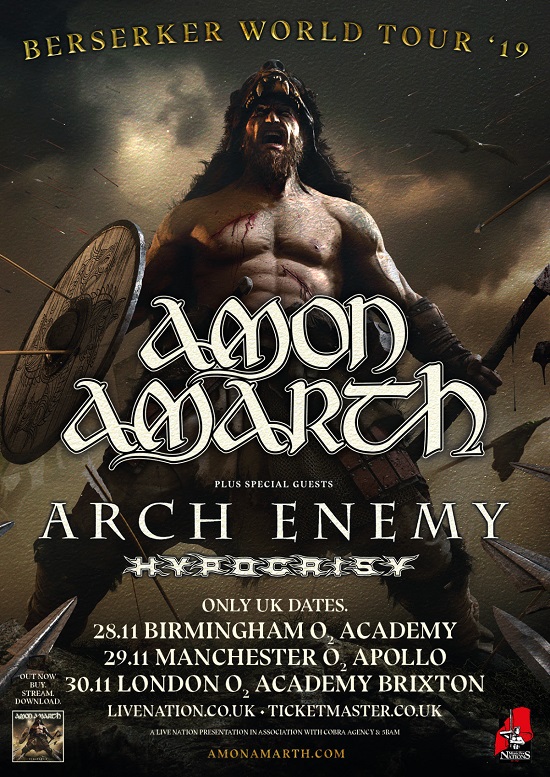