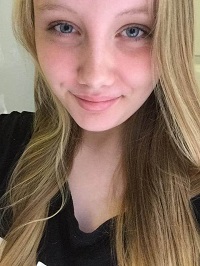 Given we at Über Rock like nothing better than to try and showcase the talents of someone starting out, we are always keeping and eye and an ear open with everything we do. In this case, I met this talented young lady, Helene, in someone’s gaming stream on my birthday.

After a brief chat, I checked out her music demos and was pleasantly surprised to find she had a single coming out a few days later. A couple of listens later, it was clear that she is a talented person and definitely deserves to have a spotlight shined upon on her, just after self-releasing her second single. So, I had no hesitation in hooking up with her and getting her to introduce herself to the wider Uberverse:

My name is Helene, I’m from Norway so my artist name, Hells, is probably easier to pronounce for most. I love snacks, BTS, Halsey and my golden retriever Molly! That pretty much sums up my personality too hahaha

Right, let’s start with how long you’ve been making music, prior to recording these first few songs…

I started out with a marching band actually, in 2007 when I was ten. Music has been an escape for me since then. I have written poems and short lines all my life but started putting chords and melodies to them around when I was 20, so three years ago now, just for fun and because I was going to study music therapy where songwriting is a good tool.

Which instruments do you play yourself?

Classical percussion, which is among other things marimba, vibraphone, timpani, tambourine, and snaredrum. It’s a ton of fun. And then I play piano enough to get my songs up and going, and I’m learning guitar. Have also played harding-fiddle for a couple of years but gave up since I didn’t have time for it

What gave you the drive to actually start getting some of your singles properly recorded and how did you go about it as someone not under contract?

We had a final exam in a class in uni where we had to choose a song and perform it in a band situation. It was a whole concert with an actual audience, sound engeneering and everything. Even lights. We played different instruments for each other but had to sing on at least one song in the setlist. So I wanted to do something personal and Found came to mind as I had just finished the melodyline then. It was a way for me to show my creativity but also feeling a bit more free. I made it with a friend of mine in class too who played guitar for me. At that point the bridge was just a guitar solo as I hadn’t come up with lyrics for it.

I went to high-school (age 16-19 for us) with a guy who owned a music studio and thought of him instantly. I messaged him after looking into the studio a little for pricings and he agreed to help me make it. I just wanted to make something professionally since then I could say that I had done it. It took a really long time to get it done, we started in May of 2019 and it was done in November the same year. I released it instantly when it was done on Soundcloud and YouTube too. I just wanted people to hear my music.

Do you have a particular methodology to writing – sitting there with time devoting to writing for example – or is it s case of grabbing some notes when something occurs to you?

It’s different for every song for me. ‘Found’ was written mostly in one sitting while listening to other music, playing with rhythms and wordings, and then I found the chords with my friend who liked it a lot. The bridge was written in the studio when we were figuring out if he could recreate the improvised guitar solo or if that would be disrespectful. Lately I’ve been trying to do what Halsey does, in an attempt to get more inspiration for when I do sit down and dedicate time to writing; I write down lines and words in my notes on my phone all the time and then look at them when I write.

I made a plan with three albums a few months ago, and then I just sat down and made themes for songs and gave them titles and then wrote bits and pieces to them all. So that’s a completely different style again.

Where do you find your inspiration? Is there something in particular that acts as your muse?

Honestly, for most of my songs it’s been my life. I’ve been through a lot of shit and a few nice things too, and that is often what I write about as a form of therapy

So it’s more of a cathartic process for you?

What’s been the hardest thing you’re found so far while trying to record your songs properly?

The fact that I can’t do more than one song per semester as I can’t afford it, that whole thing is frustrating. But the song I’m still working on which I haven’t released a demo for or anything, has been a real struggle to make happen since I don’t play guitar properly yet and I need to communicate what I want played to a guy who isn’t inside of my head. Most of the instrumentation of all my songs are played or made by my producer.

‘Found’ had a lot of technical issues too, with his computer crashing a lot and then a flooding happening, so I always say that ‘Found’ was a cursed song to produce, ha ha ha!

Is there something you thought might have been harder, but has proven easier for you?

I don’t know yet actually. I have a feeling the release of songs is going to get harder as I put more pressure on myself, but for now I mainly do it because I want people to hear it, not to get any form of recognition. My friends and family are amazing supporters and share my stuff around, especially one who keeps making me shy with how much he shares and promotes me.

Maybe getting the music on the bigger forums…

When it comes to your musical dream, if you could right now pick anything to do in music, what would you choose?

It might be a small one, but the one dream that means the most to me and makes my heart beat just by thinking about it is to have a room full of people singing along to my lyrics. Collaborating with Halsey would also be pretty awesome!

Your latest single is called ‘Rules’ – what is it about and why did you choose that song ahead of some others you’ve written for recording now?

‘Rules’ is about how I felt in a mentally abusive relationship I was in a few years ago. It was written and finished before ‘Found’ even was a thought and I do think it was the first song I’ve ever written to completion. We were having some issues with a different song that is still in production because of lack of access to live instruments, and so we wanted to get something out this year. I wanted to do ‘Rules’ as it has always been in the top three songs I want to get out before my albums become a thing. Plus it was a fairly small production with only piano, vocal and some effects. I chose for it to come out today on the International Mental Health Day so it can be a reminder to never let yourself be trodden on like I was.

OK, one more question for you… you’re headlining a tour in a massive arena and you can ask for anything you want on the artist rider, however extravagant or exotic it is. What are you going to be asking for?

Every single one of the crew gets a hug or a handshake, whatever they are comfortable with, every day of the production of the show. I would literally be the smallest part of that show, they did all the work. And donuts!! A lot of donuts for everyone to eat, plus some extra just for me

Where can people find you and your music?

Thank you for the amazing talk, it was so much fun to do this!