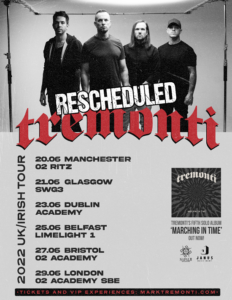 With all the fuss and furore surrounding Mark Tremonti’s release of an album of Sinatra covers (which we loved, btw – Ed) this year, the chance to see him live was always on my radar. However, I didn’t know this was going to be the situation when the original gig was postponed from January.  The addition of The Raven Age was a bonus.  Los Angeles based Bad Wolves had been replaced by the female four piece Hawxx.  As usual I try to be there for the first band and this was no exception. However, circumstances conspired against me and I arrived somewhat later than planned, therefore missing the Londoners’ set… hopefully next time around, eh.

By the time I got in, The Raven Age opened up with the track I saw at Download, ‘The Day The World Stood Still’ from ‘Conspiracy’. The crowd by this time had reached almost capacity but it still didn’t stop them from enjoying Matt Cox (bass), George Harris (guitar), the new guitarist Tommy Gentry, vocalist Matt James and the very animated Jai Patel on drums rattling through the 40 minute set.

Degrees of “heavy” punctuated by James vocals which have got more powerful since I saw them in The Fleece on the album launch way back pre-pandemic.  I liked the album so much it was my album of the year for 2019, so there was no way I was going to dislike it live.  Frequent calls from James of variations on “how are we doing Bristol?” and regular encouragement for audience participation were met with enthusiastic responses from the crowd. The band were good in 2019, better at Download and really good in this venue, so regular touring with megastars like Iron Maiden and Tremonti has only improved their stage performances.

These lads are on a serious upward trajectory: I suppose its aided if your dad is the one and only Steve Harris I guess, although they are seriously good without that assistance. They always say save the best ’til last and with ‘Fleur De Lis’ they always do; it’s a fantastic track.

Mark Tremonti has a reputation as one of the best guitarists around on the back of his time with Creed and one of my other favourite bands, Alter Bridge, who I have seen on every tour since about 2012. However, this was my first opportunity to see him with his own band. Was it worth the wait? Read on to find out.

Coming on at 9.20, the four piece  of Tremonti, Ryan Freedman (guitar), Tanner Keegan (Bass) and the incredible Ryan Bennett (drums) lead in with the absolute banging riff from ‘Thrown Further’ which, with the feel of a heavier Alter Bridge track, is a total display of Tremonti’s vocal style: a lower register than Myles Kennedy but still impressive.  Add to this the rock solid drumming of Bennett and the guitar playing of Freedman taking much of the lead section until the breakdown and the booming bass and energy of Keegan is a damned good starter.

An almost quiet opening lyric from Tremonti on ‘If Not For You’ belies the rest of the track, with an ethereal guitar riff carrying the track the underpinning drumming of Keegan is really impressive to hear (and see too even from a distance). Then the crescendo – much heavier bass line/drum driven section before the return to the earlier feel and outro, a cracking track on the album but live… wow… just wow.

Then a real ripping bass-drum rhythm takes the lead on ‘My Last Mistake’: if this is what I have to look forward to for the next 90 minutes then I was going to be thoroughly impressed.

Whilst the heavier metal genre of music is not my usual cup of tea, it does not stop me appreciating the technical and artistic ability on show from all of the band.  So you’re afraid continued in the same drum-bass driving opening and Freedman continued with much of the guitar duty frequently being applauded by Tremonti himself throughout the set, and rightly so, he is an excellent instrumentalist.

After the headlong rush into the speed and weight of the opening section and more gentle side of Tremonti is displayed in the opening of ‘The Things I’ve Seen’ and ‘Not Afraid To Lose’ that are more reminiscent of the style of Alter Bridge-no complaint from me and is very impressive vocally too.

This is how the set progressed through the rest of the evening with the occasional crowd interaction from Mark on the delay brought about by the absence of live music of over two and a half years.  Then just as the crowd started to warm up and begin a mosh pit on the lower levels Mark pointed out the Hawxx girls in the crowd who got a huge cheer.  As they continued to mosh along to the heavier songs in the set a guest appearance from Matt James from ‘The Raven Age’ on Dying Machine complemented both vocalists ability really well and the crowd loved it too.

Finally the title track from ‘Marching In Time’ hit the crowd between the ears for seven-plus minutes of metal might and the occasional respite for the vocals in between, another brilliantly written track, as varied as it is intense in parts. After that the respite of The First The Last’ was really needed by all, band and audience alike.

With the final song being ‘Wish You Well’ the breathless tour de force that is Tremonti was over. My first but definitely not my last Tremonti gig, well worth the money and a set I would really love to see at Steelhouse that could only be topped if Alter Bridge were there too! We’ve had Myles Kennedy there so, go on Mark, make some serious Welsh metal heads very happy in the not too distant future… please!