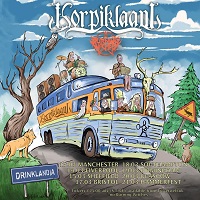 Finnish folk metallers Korpiklaani have become the latest band to pull planned tour dates in the wake of the postponement of the HRH AOR and Hammerfest festivals later this month.

Korpiklaani had been due to play seven headline shows, starting in Manchester next Friday (13 March) in the run-up to Hammerfest.

However, in a statement on their Facebook page earlier today (Saturday), the band told fans:

“With the deepest regret we need to cancel our UK tour. With Hammerfest being postponed we decided to also be on the safe side and respect that public safety comes first. We are in discussion with Hammerfest and our UK promoter to return as soon as possible. We will continue with all our other shows where possible and allowed.”

No information has been provided regarding whether tickets will be refunded or will remain valid for any rescheduled dates.

Korpiklaani’s announcement comes in the wake of the decisions by US sleaze bands Enuff Z’Nuff and Faster Pussycat to cancel their own headline runs following the “postponement” of HRH AOR. Sons Of Apollo also cancelled the remainder of their European tour, which was due to visit the Islington Assembly Hall on 19 March. UK proggies Touchstone also announced that they were postponing their 9 May co-headline show at The Garage because of the coronavirus outbreak.

To date, outside of a confidential email sent to ticket holders, citing “force majeure”, and the addition of the word “postponed” on the two Facebook event pages, no official announcement has been forthcoming from Chic Festivals, the company behind the HRH and Hammerfest brands, regarding the pulling of the two weekend events. A statement promised to Über Rock by close of play on Wednesday past, when we first broke the story, has so far not been forthcoming. Obviously, we will bring that to you if and when we receive it – but we’re not holding our breath. What is clear, however, is that the cancellations contradict advice issued by the Featured Artists Coalition (FAC) on Tuesday – the day before the HRH/Hammerfest “postponements”.

The second phase of the UK Government’s action plan for dealing with the coronvirus, or COVID-19, outbreak is referred to as the “Delay Phase”, which could include restrictions on, or even the banning of, large-scale public gatherings. As recently as yesterday (Friday), the Government warned that the battle against the virus may continue into the summer months – which could have knock-on effects for festival season. In light of this, earlier this week, Über Rock contacted a number of major festival organizers – including 2000 Trees, ArcTanGent, Bloodstock, Download, Ramblin’ Man Fair and Steelhouse – asking if they were putting in place any contingency plans in the event of the Government moving to the delay phase and the situation continuing into the summer. None of them has answered our question. Earlier today, however, the organizers of RMF posted the following on their Facebook page:

“A few of you have asked us already so we want to reassure you that at this moment Ramblin’ Man is going ahead as planned! We are monitoring the situation as well as official guidance from the UK Government and the World Health Organisation closely, and Ramblin’ Man is taking place on the 3rd week of July, five months from now. If this was to change we would inform you and take the appropriate next steps.”