The Striders – ‘Out Of The Blues’ (Sliptrick Records) 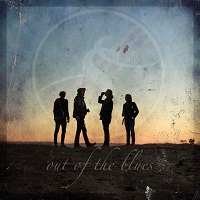 This quartet of young friends come striding out of the southern Swedish university town of Jönköping well versed in the art of blending classic hard rock, blues and soul influences into the mould that has earned itself the epithet of NWoCR in recent years. With the ten tracks on this, their debut full-length offering, The Striders step forward confident in the knowledge that they have being paying full attention in class and have come out with top marks for effort, style and execution.

In fact, it is hard to tell that ‘Out Of The Blues’ is a debut album, such is the level of aplomb and, yes, confidence displayed by its creators. It has a maturity of sound that many more experienced acts would probably sell their guitars to achieve, and the result is a very impressive declaration of intent for the future prosperity of this new outfit.

It’s most striking aspect is how well each of the musicians interact with each other: all too often, especially in the classic rock sub-genre, over-emphasis is placed on one instrument, e.g. the guitar, or one aspect, e.g. the vocals, to the detriment of the other players concerned. But, where The Striders score additional marks is the way in which everything blends naturally together, no singular element outweighing or overpowering another. In fact, you consistently getting the feeling that, for example, Victor Gustasson’s exemplary voice is another instrument rather than a separate entity, especially in the ways in which he wraps it around and between Mattias Gudasic’s guitar harmonies and melodies.

Inevitably, as with every other band inhabiting the NWoCR sphere, The Striders will draw comparisons with what has gone before and what is going on in the scene at the moment: if you are looking for comparators, think something along the lines of Matchbox Twenty jamming with Rival Sons and you’d probably be pretty close to breathing the same air (current quarantine restrictions permitting, of course). Along the way, The Striders add some lovely little touches of their own, such as the beautiful slide arrangements on ‘Whole Lotta Lovin’’ and ‘Bag Full Of Bones’, the impressive Townsend-referencing lead guitar riff on lead single ‘Standing On Top’ and the noir-psych of epic closer ‘Hellhound Blues’.

The overall result is an album that slips down as smoothly as the glasses of mead in which we at ÜRHQ have been indulging a little much of late. And we’ll say “skol!” to that!