Don’t you just love the smell of rock ‘n’ roll in the morning? Or in the afternoon? Or in the evening? Or any time at all, in fact? Well, we at ÜRHQ certainly do, and we’re glad to say that we are starting to enjoy that heady, musky, unmistakeable aroma once again, as life starts to return to some sort of normality after 18 months of chaos and turmoil, and most of us are able to get out and once again enjoy the pleasures of a live show…

Two weekends ago, and after a personal absence that had stretched to two years, I once again undertook the climb up the mountain to Hafod y Dafal Farm, the home of Europe’s highest rock festival, and Wales’ premier such event, Steelhouse. In between other duties over the weekend, I got the opportunity to catch up with a band rightly regarded as one of the rising stars of the NWoCR scene, Empyre, after they played the Sunday morning “hangover set” … anyone who missed it really missed a treat. 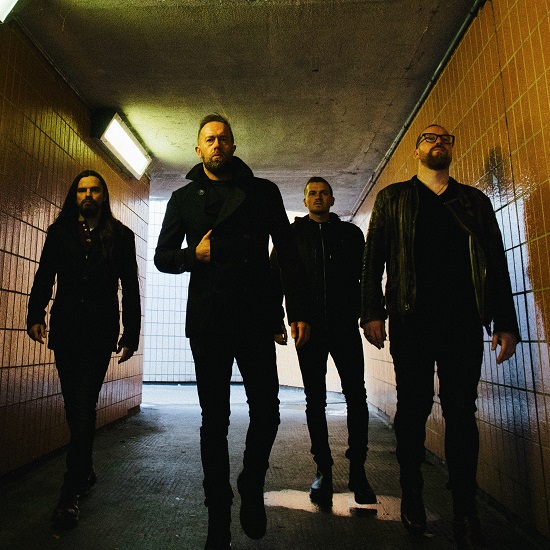 As this was my first time hooking up with the guys, I started by asking them where they hail from…

Henrik (Steenholdt – vocals/guitar): We’re from Northamptonshire, pretty much within a 20-30 mile radius of each other.

That must make practise difficult?

Did (Coles – lead guitar): No. No, that makes it actually really beneficial in that we are all in the same county. Henrik’s about 20 minutes from me, Grant (Hockley – bass) is about 10 minutes from Henryk and Elliot (Bale – drums)’s at the other end of the county, so actually its more convenient. When restrictions were lifted, we were able to meet up and graft and rehearse and play together. So, kind of the counter of that; its really good that we are all close together. What about you guys: do you think we’re close?

When I looked who was on the bill, I found ‘New Republic’ on spotify and thought “What the F%$^ is this?”.

Henrik: In what sort of way (laughs)?

In a really good way, it’s an amazing track. I have read some of your influences so its no mystery to me that I like your stuff as I like most of your influences, e.g. Shinedown, Alter Bridge and Black Country Communion. In the grand scheme of things, is this the style you are going with?

Elliott: I don’t think so, as there are a lot of different elements to Empyre. So, if you listen to the album, some of it’s softer, more introspective, more ambient, other songs like ‘New Republic’ are more sort of foot to the floor riffage and other tracks like ‘Only Way Out’ are a bit more anthemic.

Henrik: I think what we are trying to do is with the next album and the new stuff coming out is to give a mix of novelty and familiarity. There will be some more ‘New Republic’ style with one or two songs like that.

Did: I think part of the issue is that we have such a lot of diverse elements from a range of styles and eras in music and not just rock as well so that kind of comes to the forefront in the melting pot. Certainly, like Henrik was saying, the next electric material will have that sense of “Oh yeah this sounds like Empyre” but there is going to be some other stuff that’s going to knock your socks off. Stuff that no one else is really doing and some surprises as well. As well as that, during the past 14 months we released an acoustic album. So that was a complete exploration of our other side, our alter ego, which is like an homage to the ‘MTV Unplugged’ iconic performances from the likes of Nirvana, Stone Temple Pilots, Pearl Jam. We decided to do a full production in the studio with a grand piano and some orchestral music too.  Which loads of bands have done but it’s another opportunity to explore other avenues.

Given those influences and the bands I named, there are a few tracks from each that are regulars on my own playlists, such as ‘Amaryllis’ or ‘Cut The Cord’ for something heavier. Alter Bridge is either ‘Blackbird’ or ‘Metallingus’ for the heavier stuff and there is only one BCC one: when you get to my age you start to appreciate your mortality, so it’s got to be ‘Song For My Last Resting Place. What are your favourites from those bands?

Did: Henrik introduced me to Shinedown… we actually had the privilege of opening up for Shinedow Well indirectly! When they were touring with Alter Bridge at Birmingham Arena there is a connection with an unsigned stage, so they gave us the chance to play an acoustic set before the big arena act. So, we were literally one door away from the real arena.

I first listened to ‘Cut The Cord’, which is a fantastic aggressive song that I like a lot. They did a BEAUTIFUL cover of ‘Simple Man’, which is very stripped back, almost country. Henrik, your probably more of the Alter Bridge fan.

Henrik: ‘Broken Wings’ from ‘One Day Remains’, Alter Bridges’ first album, was the one that really caught my attention; that and the track after it, ‘In Loving Memory’ are the songs from Alter Bridge. Then ‘Blackbird’’ as you mention and Cut The Cord’ from Shinedown. Black Country Communion? I don’t actually know them that well…

Grant:  I think that was one that I put in. My favourite track is ‘Common Man’. I just love it, everything about it. The drums are just insane throughout and of you listen to the end of the recording. They finish and they’re all laughing. They just got this sense that no one knew how it was going to end at that point. They’re all like “what’s going on, what’s going on” – but it worked and it’s a great track. I love it.

Did: That’s a good word! People struggle to pigeon-hole us as a rock band. Some will say rock, others will say anthemic rock or progressive influences too. Some will say “that reminds me of Jeff Beck”…

That depends on the age of the listener, obviously…

Did: Yeah – but he’s still absolutely phenomenal, IMHO. But it’s good that people aren’t just saying “you just sound like this one band” We are very confident that we have our own thing going on. A comment earlier today after our set was “sounds new, there’s nothing else at this festival that sounds like this”.

From my perspective, I’ve always envisaged Empyre to be a contemporary rock band. We love all the age-old music. Growing up on Guns N’ Roses, Audioslave are one of my favourite bands. We want to do something current, something present. So, to get that kind of feedback today has been really reassuring.

I liked the set. I love the sound, there’s no argument from me. I can’t wait until the new stuff comes out.  Given the fact that you have an electric and acoustic version of the album, and now you know a bit of my taste, which would you say I should buy? 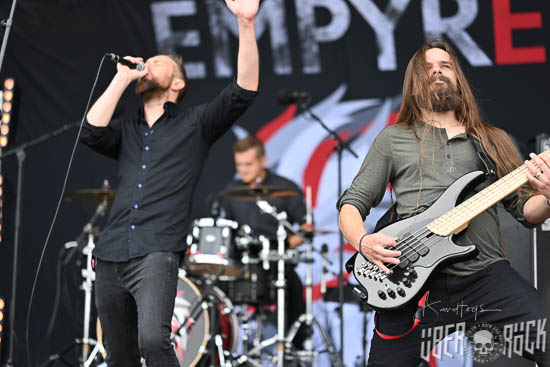 Grant: Both of them!

That’s a cop out!

Did: That the answer – both! You probably have to buy the electric. Most of the stuff we do will be electric stuff. But there are certain songs on the acoustic album that we prefer to do acoustically, or we start acoustic, with a little twist to them, which we now add to the electric versions too.

ÜR: You have a tour coming up, are you looking forward to it?

Henrik: We have a very healthy gig schedule over the coming months, joining Mason Hill and HollowStar on a ÜK tour for 20 dates in September/October at loads of venues we haven’t played before.

Given that a lot of small grassroots venues of under 100 capacity have gone to the wall during the pandemic, the Music Venue Trust are trying to encourage artists to play these size venues to help them recover. Is this something you would consider doing to support your local small venues and those in different areas?

Grant:  We still play grassroots venues. Whilst today is definitely a highlight, two weeks ago we are at our local venue called The Black Prince, playing in their garden. You’re talking maybe 100 capacity, indoors. So, we are equally at home in grassroots venues ‘cos that’s where we started and will continue to do so.  It’s great to play this, but the small venues are a different, more intimate experience, which is also really special.

Damn how did I miss that one!

Henrik: With The Rock and Roll Circus

We’ve worked with Ceri and Paul previously. The Dolls House has recently changed hands and been refurbished, and they are planning to hold all the live music upstairs in the bigger room. You have Jacs in Aberdare, The Dragonffli in Pontypool and the EVI in Ebbw Vale…

Did: We started with smaller acoustic gigs and the smaller venues gave us the opportunity to play full electric gigs. One of our favourites (now sadly closed) is the King Billy in Northampton. So, if the Music Venue Trust were to do something to support its reopening we,d be first at the door to support it. 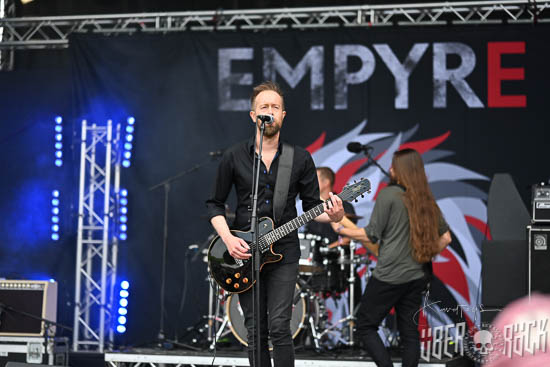 Henrik: We came off stage today and one of the Steelhouse crew asked us to come over to the Merch tent. Normally bands don’t go there but because there is no signing tent this year… There were a few people there who had seen us in the King Billy but didn’t know we were playing this weekend. It was the anniversary of her sister dying, so there was an emotional response that we got from playing a small venue in our hometown to come to play Steelhouse with 4500 people here. It’s a special connection when someone recognizes us from where we grew up.

Did: Stuff like that becomes beyond the music doesn’t it. We had it today. You can see people in the crowd singing the lyrics back. Things like bumping in to people who have Empyre tattoos or lyrics tattooed.  You get that intimate relationship at small venues that Grant alluded to. People in your hometown in the early days and sing the lyrics back to you – it means the world. So, these venues are massively important.

So, when is the next album out?

Henrik: Probably next year. If you come to see us live, you will hear new stuff, like you did today. Whether we release a single this year? Maybe. It’s more likely that the new album will be next year.