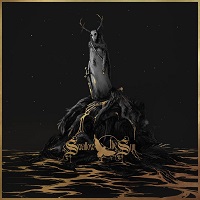 The old aphorism that suffering makes for great art may well have validity in certain instances.  After all, recent years have shown this to be the case with artists as diverse as Mastodon, Touché Amoré and Mount Eerie all using circumstances of significant loss as the catalytic inspiration for wonderful creative outputs.  With that said, it’s worthwhile considering how much, if any, consolation these achievements are to the bands in question.  In the case of Swallow The Sun’s, Juha Raivio, ‘When A Shadow Is Forced Into the Light’ is an album that he would rather not have had to ever exist.

You see, this follow-up to 2015’s triple album, ‘Songs of the North’, is a gut-level response to the death of the chief songwriter and guitarist’s partner, Aleaah Stanbridge from Trees of Eternity.  In his grief-stricken state, Raivio poured himself into a new project as a means of tribute to his deceased love, releasing Hallatar’s ‘No Stars Upon The Bridge’ in 2017.  The result was a haunting and funereal ode to Aleaah which utilised many of her poems and vocal recordings to create a quasi-collaborative farewell.  ‘When A Shadow Is Forced Into the Light’ is therefore the first full-length (a prefacing EP, ‘Lumina  Aurea’, was released in December 2018) from Raivio to reflect upon her passing entirely from his own perspective – the result being an album that is magnificent, yet mournful in quality whilst simultaneously plagued by the necessity of its own existence.

From start to finish, the record resides in a state of tension; at one level attempting to convey the beauty of the life now lost, but also that of the savage despondence of living in the absence of that life.  This tension is masterfully reflected in the opening title track, with its initial symphonic grandeur leading to cathartic bursts of death-infused doom metal.  Kudos must go to vocalist, Mikko Kotamäki for executing the trade-off from the intimate moments to the more overwhelmingly heavier sections, reflecting the rapid-fire shift of emotions outlined in the lyrics. The best example of this is found in ‘Firelights’; beginning with an elegiac tone that seamlessly transitions into a crushing Paradise Lost-esque passage, only to culminate in an oppressive, gothic –tinged segment.  These intricately crafted movements are stunning in how they evoke the spectrum of sentiments brought on by bereavement – in this instance, beginning with a note of nostalgia, eventually leading to a suffocating sensation of hopelessness.

And yet, despite the many instances of caustic bleakness on the album, the existing tension means that there are, in equal measure, as many moments of a more delicately subdued nature to be found.  ‘The Crimson Crown’ is a gorgeously, textured slow burning track that recalls the last decade of Anathema’s work.  The closing ‘Never Left’ perhaps best encapsulates the overall intention of the author for the album; concluding with the notion that the presence of such darkness and suffering in life surely must allow for a hope and solace in death, allowing for a legacy to be maintained with those left behind.  Although ‘When A Shadow Is Forced Into the Light’ has much to say of despair when dealing with loss, it’s binary focus ensures that it is as just as much of an uplifting experience in its celebration of human life.