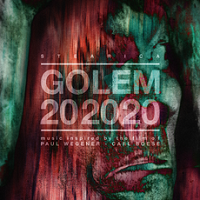 Whilst nursing a mild hangover on a Sunday morning I inexplicably found myself watching a movie that is more than 100 years old. But this was not some accidental find whilst scrolling through Netflix; no, it was actually research for this album review…

You could say that this album is a bit of an art piece as it was commissioned by The Italian National Museum of Cinema to capture the spirit of the famous silent movie ‘Der Golem, wie er in die Welt kam’ (‘The Golem and How he Came into the World’). This is perhaps one of the most famous renditions of the Jewish folklore tale of 16th century Rabbi Judah Loew ben Bezalel who created the golem to protect his people from anti-semites in Prague. Now, if you’re going to get some musicians to capture the essence of the soundtrack to a silent film, you’re naturally going to turn to progressive musicians, which is where Trurin trio Stearica come into play as they picked up the mantle to bring the Golem to life (again).

‘Golem 202020’ was originally recorded in a live performance in 2014, then a little flair was added in 2019 whilst maintaining the original composition to become this final release. The tracklisting is separated into chapters in line with the chapters set out in the original film so that it covers the full story of The Golem. The ill omen in the stars that heralded the danger to the Rabbi’s people, shaping the clay to form the body of the Golem, creating the spell to invoke Astaroth to give the word to be written on the shem to bring the Golem to life, the chores of the Golem, the fire at the Rabbi’s house and the eventual demise of the Golem are all represented here in fantastic instrumental progressive music that maintains a connection to the original music of the film.

‘The Stars Reveal (An Impending Calamity – Chapter 1)’ is a gentle introduction to the story that sets a general feeling of foreboding. It’s a piece that projects an astral sensation through the gentle chimes and faint rolling cymbals that is over almost as quickly as it begins but not before it leaves enough of an impact to mark the first chapter of the story (which in itself was not a particularly eventful chapter). In contrast though, ‘The Great Spell (Invocation of Astaroth)’ has a significant amount of energy in its depiction of one of the more intense scenes in the movie. There’s a real intense energy to the guitar riff and syncopated drum rhythms that builds up into a bold riff that heralds the arrival of Astaroth for the Rabbi and his assistant to compel him to give the word. This then creates a second period of tense build-up to eventually return to that bold riff again as Astaroth gives the word before fading away into obscurity, which is matched by the fade out of the song.

Personally, I would recommend approaching this album in the same way that I did by watching the film first, because not only will this broaden your own cinematic experiences, but it will really bring the music to life as you can tie each track back to the images in the film really well. Hell, I only watched the film once, but as I listen through this album, each scene comes back to me vividly so you can see that Stearica have worked exceptionally to capture everything into their compositions. Musically it would be unfair to compare this to the work of other bands as it is something that really should stand alone, but to give a feel of what you’re in for you can expect to hear a wide range of elements from fuzzy guitars, gentle synth chimes, complex drum rhythms and a whole rollercoaster of different emotions.

I really enjoyed ‘Golem 202020’ and found it pretty refreshing but I’m not sure how well it holds up without watching the film first. Taken as a standalone piece it is still a strong instrumental album but having the album invoke the memories of the different scenes of the film is a whole different level of experience. It would be a bit like listening to a Hans Zimmer soundtrack without having any idea about the film it’s taken from, it will still be a great album, but it wouldn’t have anywhere near the same effect. It’s definitely worth giving a go if you fancy immersing yourself in a couple of hours of culture that is essentially over a century old and fancy something that’ll get the old gray matter working a little bit!