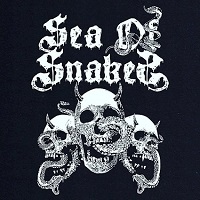 If you were to merge the attitude and swagger of Doors frontman Jim Morrison with the metallic malingering of, say, Megadeth and angst-laced tones of Stone Temple Pilots, you’d get Sea of Snakes. I wonder if gravel-voiced frontman Tracy Steiger often wears leather pants (in the American sense of the word)? Certainly, there’s a rock-star attitude dripping from the vocal.

It’s no surprise, given their showy sound that Sea of Snakes are based in Los Angeles. Steiger began… ehm… Californicating with twosome Jim McCloskey (guitars) and Jeff Murray (drums) before Mick Coffman joined on bass. They recently signed to Metal Assault Records whose founder, Andrew Bansal, is a big fan of their previous projects including The Shrine (Murray) and Motorsickle (McCloskey). ‘World of Fire’ is their debut offering, recorded at Total Access Studios, LA.

Roll into single, ‘Let The Fire Burn’, the opener has a relentless reverberating sound led by the bass and undeniable swagger. It’s steady furry rhythm guitar tempo leads into wailing riffs. Let…the…fiyyaaahhh…burrrrn! It’s getting hot in here. It’s probably the Marijuana smoke. ‘Ride The Line’ has Morrison all over it as Tracy can ‘…see my reflection in the smoke in the sky’. Yet it’s only the taste that is familiar, Sea of Snakes don’t feel as languid in their approach, preferring to rock hard, for want of a better expression.

Meanwhile STP come crawling through in moody ‘Son of Man’. Try not to react to the interplay between Coffman and McCloskey and, if you succeed, which is highly unlikely, the solos will reign you in, willingly.  Clashing drums create a lot of drama in ‘Fear Behind the Stare’ but the pace slows a little to compensate in case we startle anyone. It’s like a beast creeping…. Ah it reminds me of Iron Maiden.

I absolutely love the name of the last track, ‘Drink Your Teeth’. A song that tells the tale of getting sucked into the hole of drowning your sorrows and of the warped, bitter and revenge fuelled thoughts that fester. Inevitably it gets heavier and messier towards the end as the mind gets ripped apart with self-inflicted pain and Tracey gets to have a good old scream. In fact, they all take a moment to batter/rip/rasp the hell out of their ahem… instruments. Given the tone of this review it would be really interesting if I ever got to meet these guys at a gig…

If you like dirty bass, fuzzy chugging rhythm and intricate lead guitar you’ll like this. A rock-solid, sleazy little EP reminiscent in attitude to the big rock bands of the ’80s but with their own twist(s).

Ouch, that hurts, in a good way…