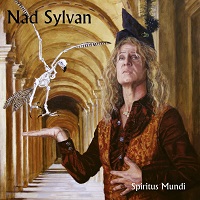 After finding Nad Sylvan through his work with Steve Hackett, then his previous release, ‘The Regal Bastard’, I have made a point of checking out his back catalogue and have found myself mesmerised by his body of work repeatedly, so, for clarity, it’s fair to say I’m already a fan of Nad’s work. Having been drawn into Nad’s musical visions so easily before, I was really curious where this new one would take me, especially given the lyrics and inspiration drawn from the poetry by W.B. Yeats!

The fact that there was no lyrical pressure on Nad, along with Andrew Laitres, with the exception of a couple of bonus tracks, means that the highly talented pair have had to create the soundscapes around the existing poetry and it gives it an entirely different feel. The pandemic has clearly given them both more time to work on perfecting the mixing and mastering, too, aiding them in creating something that surpasses anything Nad has done before. There is plenty that follows on from the title track of his previous release, ‘The Regal Bastard’ with how open the sound is, almost like your mind’s eye just being wrenched open and the images are being beamed directly into it.

The extra time taken really shines in the orchestral overtones that layer perfectly in amongst the rest, glimpsed at times when the light is not being shined on the sumptuous singing arrangements of Nad and Andrew, taking turns as they do to lead and bolster the other. The entire soundscapes bristle with so many layers that even after several listens I keep discovering new things, so exquisite is the composition and subtly complex in creation leading to so much listenability beyond the usual, that there is probably even more depth I have even yet to find.

The entire album is so strong that I would seriously struggle to pick a favourite from it. There are complexities that I still get quite slack-jawed at when listening along and even with expensive headphones to augment the clarity there is such hidden depth that shows itself in a so many different ways. Melodies and harmonies galore are meshed with such subtlety and poise as to create something that is uplifting in spirit, even when the subject matter may not be, creating a juxtaposition which Nad and Andrew have combined to not just succinctly use but to master in ways I thought I had heard perfectly done before this.

This could be seen as the pinnacle of an already outstanding contribution to music on behalf of Nad.