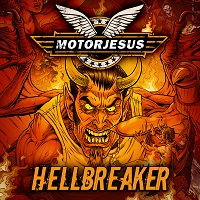 This is another of those sort of albums that I just love – one that does exactly what it says in the title, which sets out its proponents’ intention clearly and simply: and that is to create the sort of dirt-encrusted heavy-ass, pedal-to-the-metal rock ‘n’f’n’ roll that comes roaring out of the depths of hell like Vin Diesel with a tank full of napalm under his hood and straight into the darkest recesses of your soul…

Motorjesus don’t fuck about, revving things up quite slowly with the rolling opening of ‘Drive Through Fire’, before turning the volume button up to 11 as a sharp drumbeat sees them slamming that accelerator to the floor and sprinting out of the speakers faster than Usain Bolt on steroids, as they deliver a collection of tunes catchier than a social media conspiracy theory. Underpinned by rhythms solid enough to hold up an autobahn flyover (well, these guys are German, after all), the twin guitars interweave beautifully, creating handsome harmonies and attractive melodies, all over-topped by vocals which manage to snap and snarl but also sound like they were delivered with a massive smile on Chris Birx’s face.

Of course, being German, there is plenty of cheesiness, in some places – such as ‘Car Wars’ and ‘Lawgiver’ (yes, that one’s about Judge Dredd) – more than enough to keep the Cheddars production line working overtime for a month of Sundays: but, hell, metal has always had that element to it, it’s just how you deliver it, and on this occasion Motorjesus do so with affectionate effectiveness.

‘Hellbreaker’ delivers just the sort of rock ‘n’ roll that we all need in these trying times: honest, blue-collar, red-blooded, the sort that doesn’t make us think too hard but just ramps up the enjoyment factor, getting your feet tapping, your head nodding and your hands reaching for that air guitar. Crack open another six-pack, crank up the volume and suck in those rock ‘n’ roll fumes…