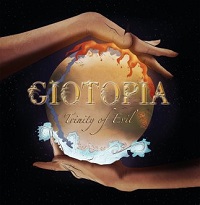 I love when an album tells me a story. I probably mention it at some point in every review. Few things win more points with me than when music feels like it is taking me somewhere. I expect it at a track level but when it is at an album level it is sure to get my attention. This is true with the music itself as well as the lyrics. I believe this shows a deeper pride in one’s work. It also can be difficult to pull off well. As with any storytelling, it can be hard to keep the audience’s attention but when you nail it you end up with an awesome album. The question is how do I feel about ‘Trinity Of Evil’? Do they nail it?

Musically, everything is pretty good for what you would expect from the genre. There are aggressive tones that evolve within every track and from track to track. There is the occasional time when things soften up giving a variety to the style and helping to really sell the storytelling aspect of the experience. I will say that the overall tone does not really take as much advantage of lower bass notes as I expected, particularly with the guitar, making the tone of the album feel a little hollow at times which is unfortunate but only a minor complaint.

Lyrically, they set the stage wonderfully with spoken word on the first track putting the pieces in play for the story we are about to be told. I love this. It draws you and makes the rest of the album easier to follow. Unfortunately, the delivery is not my favorite. The vocal style has a lot going on. There are a lot of layers and now all of them are totally complimentary. While that did fit well with the story it did at times make the tone a little harsh on the ears leading me to listen at a lower volume than I normally would.

All in all, this is a decent album but due to the minor complaints above, I found myself having to be in the mood for this one at times. There were times when I thoroughly enjoyed my time and others when I found it distracting. The more attention I could pay to the album the more I enjoyed it, but if it was playing in the background while I was working on something else, I found the experience less enjoyable. That being said, I believe this one is worth your time. It is a good album just not perfect.