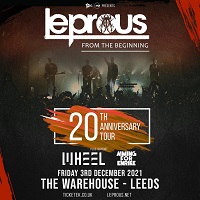 So, after a massive trial getting to the venue thinking I’d miss half of Aiming For Enrike’s set, I arrive just to be told that Wheel have had to drop out as their equipment hadn’t arrived. Quite upset by that as I really love Wheel! But this happens so let’s talk a lot about the two remaining bands then.

Aiming For Enrike‘s set starts with a very unassuming walk on, starting out of the dark with a very quiet mix of guitar and drums. Admittedly this band’s been on my radar for a while but I never got round to checking them out so here goes eh?

As far as I can tell this is some sort of loop pedal trickery with the guitarist layering multiple melodies, initially I thought a backing track too but I’m pretty sure it’s all live, his pedalboard is massive! I’m also feeling a bit over-equipped as I put my ear plugs in just in case and this sort of music isn’t particularly loud or heavy, it’s more intricate and groovier.  So far I’m not sure if this is supposed to be a continuous medley or whether the songs are just quite long.

As it moves along, the songs become more fleshed out and funky, I’m really getting into the groove of the beat and the flow of the music – this is bloody interesting stuff. I find it quite hard to even come close to pigeonholing this act, I mean it’s like taking a jam session and turning up the complexity to 11. I can see why I see this band floats around the Arctangent, Complexity and Portals scene so often, and I’ll be making time to see them if they’re around next year.

After a chat outside with some attendees, I find out that Leprous‘ old drummer is playing their older stuff, while their current one does the newer stuff – this is going to be a right treat. Einar walks on and we’re about to begin the special anthology set, and man, I legitimately never thought I’d catch this due to the London date but here we are!

With a backing video to match showing old footage and photos from their earlier days, the rest of the band walk on to a sombre intro. We’re already on one of the bangers from ‘Tall Poppy Syndrome’, and hearing Einar kick out some uncleans is jarring after seeing them live so many times before and never seeing this era.

Something also has to be said for seeing Leprous in a venue of this size. Previously I’ve usually seen them at Manchester Academy 2 or at a festival, so typically much larger stages. At The Warehouse in Leeds however, I’m almost directly in front of them, so this show is not only a special anthology but an intimate show to boot. A bit further in we’ve got both drummers playing at the same time! And now a trumpet player? Leprous are really pulling no punches here, they’ve planned a massive show and they’re smashing it.

Moving forward with ‘Bilateral’ now and the big chunky eight-string guitar’s out! As Einar remarks, the songs on this album are pretty damn long! As we edge towards modern Leprous, we hit the ‘Coal’ era, with its change towards a more stripped-down sound and shorter, punchy songs.

It’s hard to take stock of the intricacies of the show since we’re blasting through the back catalogue at breakneck speed, next stop, ‘The Congregation’ and we’re in the part of their history that I’m much more familiar with. At this point the drumming switches to Baard full-time, and the epic singalong songs hit their stride. The audience clearly is on the same wavelength at this point with them singing back the words in a much louder chorus now.

Moving ever closer to ‘Aphelion’, we hit the ‘Malina’ era; This and ‘Pitfalls’ are by far my favourite albums so I’m officially in my element now!  I love that it seems like the way they’ve picked the songs is by selecting two of their favourite tracks from each album, it’s an amazing way to appreciate the development in their sound. And no sooner do I type that we’re in ‘Pitfalls’ with ‘Below’, a melancholy, epic ballad with a chorus that demands you get on Einar’s level.

Finally, were in ‘Aphelion’ – Leprous’ most recent album and a fine one at that, sharing some of the interesting experiences they had in the writing of this album with, and I quote, “a completely free schedule”. It’s great to get to hear these songs live finally and Leprous are every bit as thankful to be back on the road as I am to see them up on stage smashing out their best. I sincerely wish them the best on the road for the rest of this tour; have a great one lads.