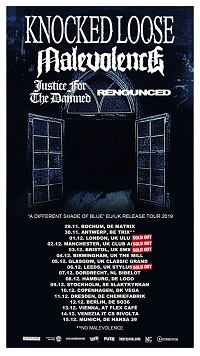 A four-band bill awaits me in my second home, as I step things up a notch with the heaviness, after a few punk gigs, into a modern hardcore and metal hybrid territory. Kentucky hardcore punks Knocked Loose have only been around for six years but seem to have garnered a burgeoning reputation for their live shows, so I figured why the hell not, given their proximity.

Our first act are Renounced and the five-piece start things off the right way, with the pit opening straight up.  The venue is still filling up but quickly so and judging by the amount of nodding heads and the number of people that join the pit when beckoned, they go down very well, with even the newcomers seemingly getting straight into the action alongside the early birds. They play a musically tight set and do themselves justice with a strong set of crossover metal that gets almost everyone headbanging along, myself included. The venue is very busy by the end of their set and the sea of people moving along to the drums and breakdowns says its job done. A good start to proceedings.

Taking things a bit more international, Sydney hardcore act Justice For The Damned take over on stage and get straight down to business, continuing the good work that Renounced had started. Using duel vocalists works well, allowing each to concentrate on their parts and rest their throats in turn and while the pit does not seem quite as angry as before, even with the room looking full now, there will definitely be some whiplash tomorrow, even at this stage, with the sheer amount of heads banging away around the crowd.

It’s another tight set, with the band being a bit more happy to include breakdowns than Renounced, while the frontman spends a lot of time trying to cajole people into either two-stepping in the pit or to bang their heads, both of which gets more of those around me acting. The set is enjoyable and well played, so it’s once again job very well done for the antipodeans.

Malevolence vocalist Alex Turner, with whom I had managed to grab a chat just before doors, sure likes his circle pits and crowd surfing, both himself and from the crowd. Man, does he know how to get the room pumping too, transforming from mild mannered and friendly in the interview to raging psychopath on stage. While the earlier bands had been more into the more modern hardcore sound, Malevolence bring something a bit different to the table. Alex goads the crowd forward throughout, entices circle pits and shouts for everyone to come over the barriers and say hello and the sheer energy coming back from the crowd allows him to afford himself a smile a few times through the set.

Mixing favourites such as second single ‘Condemned To Misery’ with a brand new track, as well as closing on the title track of their last album, ‘Self Supremacy’, they more than bring their A game, laying down a ridiculously high bar for our headliners to top. The band are tight, all more than able with their respective instruments, the sound sludgier than the bottom of a prehistoric tar pit and the sheer atmosphere from their positive lyrics seems to inspire every single person in the room. A phenomenal performance.

It takes a song but Knocked Loose continue the utter chaos that Malevolence created as our main support the area in front of the stage has become a snarling mass of pulsating bodies in the mosh pit and the acclaim is loud for every song. The heat levels are becoming almost like a balmy summer, such is the energy being expended by both crowd and bands, making the entire room into a sweat dripping box of noise as everyone roars back at the band to every word that they know. The bass rumbles out, vibrating the entire room, while the band continue to lay out their heavy grooves, provoking each loud and physical response from every audience member.

High points definitely have to be ‘All My Friends’, the point where it majorly kicks off in the room, ‘Oblivion’s Peak’ and ‘Mistakes Like Fractures, all of which elicit big responses from the audience. The crowd surfing may have stopped, without the goading of Alex bringing it forth, but the atmosphere is not dampened, nor in any way less relentless as Knocked Loose have definitely brought their shit tonight, living up to the gauntlet laid down by each of the previous acts in turn. The shriller main vocals are less to my taste than the earlier ones, but they work well with the music and certainly go down well with the crowd. A great live performance and worthy headliners.