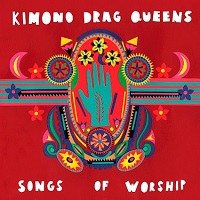 Let’s face it, it’s been a pretty tough year for everyone, but the music industry has been hit really hard by this ridiculous year we seem to have found ourselves trapped in. For a band releasing their debut album this could either be a terrible time to try and release because everyone is burnt out, or it could be the perfect time because no one has anything better to do than stay at home and listen to new music. Kimono Drag Queens are definitely hoping to capitalise on the latter with their debut album ‘Songs of Worship’ with a psychedelic nature that is bound to provide an escape from your four walls for a while.

The band themselves have been plugging away since their formation in 2016 and have released a handful of singles that have caused a bit of a buzz – ‘Hunters’, ‘Wild World’ and ‘Willy’s World’. The good news is that, if you’ve already been won over by these singles, all of these tracks have found their way onto ‘Songs of Worship’. If you’re sat there thinking “Kimono Drag Queens? Never heard of them mate” then let’s take a look and see what we have.

Overall this is a pretty eclectic album that changes direction more frequently than the UK Government (sorry about the political joke, but I couldn’t resist). It combines quite a few different elements to form an album that has serious chilled out vibes and an almost exotic feel. There are hints of modern psych rock (Goat or King Gizzard for example), ‘60s music and folk music. It’s not just any folk music though, there’s also elements of Tuareg music which gives the music an exotic, middle eastern flavour to it. It’s just the thing to whisk you away from the general gloominess at the moment.

‘Evil Desires’ could possibly be the most eclectic track of the bunch, with quite a clash of cultures that somehow manages to come together to form something coherent. It starts off sounding something like a funk/disco number, but it doesn’t stay that way very long. Once the breathy vocals of Harry Webber layer in over the top, the song takes on a life of its own and starts to transition into a bit of an eastern tale. Like many of the songs on this album it sounds like all the band members had their own individual ideas of the direction to head and then they collectively mixed them all together in a massive pot to see what the result was. It’s a little bit out there, but it’s something I can definitely get behind!

Overall ‘Songs of Worship’ is a great escape into something out of the ordinary. It’s the kind of album that you can put on after a hard day and just let it wash over you as you get lost in the psychedelic sounds. It will definitely appeal to fans of the likes of King Gizzard and the Lizard Wizard, GOAT and other modern psych rock bands, but will also appeal to those who like their music with more of a substantial experience behind it. Kimono Drag Queens are ones to watch as there is some strong potential showing in this debut album and it will be interesting to see where this takes them as time goes on.