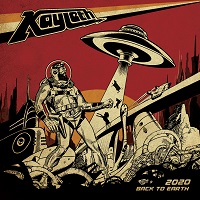 Space doom and stoner rock – two of my favourite music genres! Though I had previously somehow overlooked Kayleth, they’ve been getting their groove on for 15 years already, which is a decent enough legacy in itself. A listen through some of their older tracks from their previous two albums gives me an idea of what to expect so it’s time to give the record its first spin…

Their time together has clearly given them more than sufficient time to find their time and it shows. It sounds very much like a more modern twist to Hawkwind while still being sympathetic to their sound, which is perfectly fine with me and the time they’ve spent channeling this sound is clearly very well spent, as the amalgamation of the two sounds has been expertly done so as to sound so natural as they dip in and out between them.

Tracks that immediately stand out to me as perfect examples of this blending of sound are ‘The Dawn of Resurrection’ – probably my favourite from the album after a few listens – and album opener and lead single ‘Corrupted, which showcase exactly what the album is all about, though you can’t help but feel ‘Corrupted’ relates to the current pandemic slightly too, as Enrico bellows out, ‘You feel so high… as the world begins to die!’ as well as similar variations to this line. Musically the songs do have a similar sound, though it feels more like a complete work, rather than reusing the same riff.

I’m always wary of using a Kyuss comparison for the simple reason that so many claim it but few actually deliver, but in this case, it is perfectly acceptable and correct to do so, as if Kyuss had released an album of Hawkwind orientated music, I feel like it would have sounded just like some of the tracks on this. I had a worry about the album maybe feeling repetitive after several listens, but this has yet to prove the case for me as I hit into the tens of listens. A good piece of work from the talented Italians who I hope start to release more often than they have been previously.