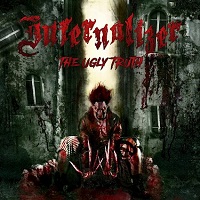 It is not all that often that I get to say this, but this is unlike anything I have ever heard before. Not really because any one aspect is totally unique, as I can hear where the roots and inspiration come from, but because I have never heard this combination of elements put together quite like this. I love when something takes me by surprise like this. It is refreshing. Unfortunately, I’m not going to say it is perfect. I do have some mild critiques but, overall, one hell of a debut album.

There is a very clear ’80s influence in the musical arrangements. My first thought when I began to check out the album was that it kinda felt like a gothic Van Halen. The more I listened the more I began to hear influence from other bands just deeper and darker tones but still those ‘80s influenced guitar riffs mixed with some more modern gothic tones. It is this really cool contrast that I would not have expected to work, but honestly works really well.

Vocally, it is very much the same. There is still that clear ‘80s feeling to how the songs progress but with a modern growled vocal you would expect in metal. It is not that simple either though. There are a few vocal styles used throughout the tracks. From that dark growl to an occasional scream and a dark ominous spoken word. All this comes together to make an experience that does not get old or feel overly repetitive. It is pretty unique.

I do have a complaint though. At times it does not feel like the track order was put together with all that much though. There were a couple of times where it felt like the track’s ending was building to a cool transition to the next but then the next track is totally different and the flow that was built is lost. The worst offender is track one to two: the whole first track feels like it is meant to be the intro but then the transition is nonexistent. It would have been really cool to build on that momentum. The same thing with the last track; it is a cool send-off for the album and the whole thing feels like an outro but the transition to it feels disconnected. It is a very small thing that does not ruin the experience, but little touches like that can take an album from great to outstanding.

All in all, I loved my time with ‘The Ugly Truth’. I think this is one that is worth your time for sure. I know I will listen to it again. It is a fun album and a cool experience. It sets the tone well for what the band wants you to feel. Pick it up. I think you will enjoy it. I sure did.