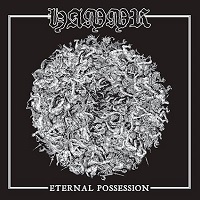 Treading a path between proto-black metal, classic hardcore and old-school speed metal, JH, the artist behind this essentially solo project, described the sound of his first full-length offering, 2018’s ‘Unholy Destruction’, as “Satanic speed”. Now, I’ll readily admit to not being familiar with that premiere opus – although I obviously checked out a few tracks on certain streaming outlets – but this follow-up, four years in the making, seems to be more or less more of the same: speed metal played at a ferocious pace, with heavy BM overtones and undertones, in terms of both its sonic and lyrical delivery.

With absolutely no let up in pace during the nine tracks ‘Eternal Possession’ could be seen as a lesson in less being more, or minimal maximalism: there is no fucking about in terms of getting to the point, and there is no attempt make this album sound anything more than it is: and that is sheer, unadulterated, dirty, stinking riffage drawn from old-school philosophies and attitudes.

Raw and visceral in its approach, and possessing no airs or graces, either in terms of the performances or the production (if you can, in fact, call it that), this is furious punk-fuelled metal, or metal-fuelled punk: whichever way ‘round you want to look at it, that’s fine by me, and quite possibly Mr Hammr as well \m/. It’s honest and unpretentious, subtle as a sledgehammer to the back of your head and just as effective. Definitely one for fans of old-school blackened punk metal (or metalpunk).