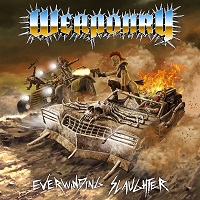 Not to be confused with the Reading post-hardcore act of the same name, this Canadian-Spanish amalgamation plough an entirely different furrow, digging up the past faster than Tony Robinson on speed as they dredge the darkest, nastiest extremities of the deathgrind sub-genre, peeling the scabbed crusts off its bloodiest sores in the process.

As those foregoing comments would suggest, there is nothing nice or pretty about this debut offering from the pairing of Jo Steel (perhaps best known for his work with Ice War) and the suitably named Dave Rotten. This is downright nasty stuff, with a stench more putrid than a tonne of month-old rotting offal; but it is a deliciously steamy recipe, it’s aroma one of repulsive attraction which lingers long in the memory.

The ten tracks steamroller over you with no sense of apology or remorse, flattening you with a gleeful grin on their twisted visages, before slamming the gearbox into reverse and repeating the process as you find yourself, inexplicably yet inexorably, reaching for the repeat button on your media player of choice.

‘Everwinding Slaughter’ is an album that lives up to its title. It annihilates all before it, decimating all that stands in its way and taking no prisoners in the process. It’s beautifully brutal stuff.