While several summer festivals have been forced to once again reschedule until next summer, and others are looking set to follow, Bloodstock has issued a defiant statement of intent to bring live metal back to the masses (sic) with the announcement that Evil Scarecrow will round out this year’s event with a Sunday night headline slot on the event’s Sophie Stage…

The guys from Evil Scarecrow dialled in from their temporary exile somewhere in the darkest corners of the Überverse to tell us all about what promises to be an historic performance:

So, we haven’t played as a band for a year. Not even a practice! We closed and abandoned our rehearsal room. Our van is gathering moss on a driveway. We have two new members who we have never played with. One of them was our main stagehand and we have not replaced that position. Basically, Evil Scarecrow are, in reality, unconscious in stasis, floating through the void of space until we clear the disease-ridden Van Allen radiation belt.

“Along came the good ship Bloodstock, who nudged us awake to see if we will come and play with them. “No”, we mumble, “No band yet.  More sleep”. They return with a cup of tea and a bacon sandwich. “It’s headlining the Sophie Stage” they whisper.  Shit.

“So, we’ve sprung back into life!  We are dusting off our props and may even have a band practice or two. So, if you want to see the most shambolic, unpractised, unprepared Evil Scarecrow show ever, then join us!  We can’t promise our usual super-polished -ahem- performance. But we promise to bring the biggest, messiest, stupidest party yet.”

A further 18 bands have been announced, all of whom will appear on the New Blood Stage over the course of the weekend of 11 – 15 August.

Gloucester metal squad Broken Jaw and Liverpool death metallers Colpocleisis will both appear on the Friday, while Saturday’s bill will feature Brummie rockers Devilfire, Irish sludgemeisters Grey Stag and purveyors of ‘true metal’, Hanowar (yes, they are what you think they are!).

The New Blood bill will be completed, by the winning acts from the various new look Metal 2 The Masses competitions, which are due to take place up and down the Über Kingdom in July.

Tickets for Bloodstock 2021 are still available. 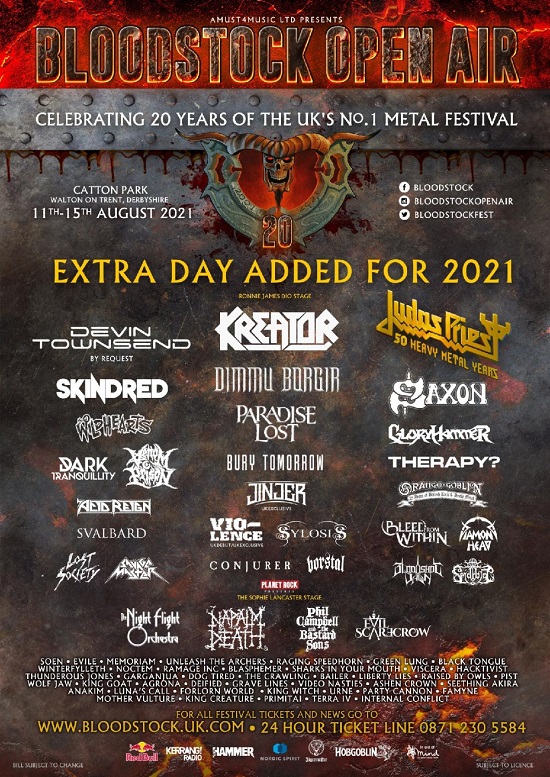