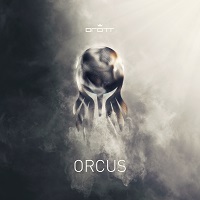 D R O T T is comprised of Arve Isdal from Enslaved, Ivar Thormodsæter of Ulver and Matias Monsen. With their varied musical background ranging from metal and jazz to classical music, they create the genre which can only be described as D R O T T. Inspired by forces of nature, superstition and spirituality, the trio explores light within darkness through their music. The trio, who came together just last year, released their self-titled EP this past March 2021, to great reviews.

As ‘Orcus’ is essentially a concept album with no lyrics, I have included the storyline that accompanies the album, and it is as follows:

“In the realms of the dead dwells Orcus, the punisher of broken oaths in the afterlife. He is Lord in this abode for purification of the souls, the Underworld. This is the katabasis of Drott. Called by The Lure, Drott is flung into the maze of Caerdroia, descending deeper and closer to the realms of Orcus. As darkness grows, Drott grasps at every beam of light possible in Katabasis, before realizing the true nature of the journey. As Drott faces the sad and gloomy shore called The Strait, contours of The Psychopomp emerge from the shadows, he is the guide of souls in the passage between the living and the dead. So begins the journey into Orcus. By The Lunar Lake recalls the echoes from the past. A feeling of tranquillity and connection with the living, unaware of the Marauders lurking nearby. Escaping the savage Marauders, Grey Gull ascends, restoring tranquillity and strength before DROTT´s final descent through The Arch of Gloom. There awaits Orcus, the judge, punisher and purificator. The Lord of the Underworld.”

And so, onto the review. The album is a roving musical adventure in a true classical music sense. Each track flows nicely on from the previous track to create a whole experience. I would therefore classify it as a modern classical piece rather than progressive rock or jazz, though it certainly does incorporate elements of both in its composition. It consequently begs to be listened to as a whole in one sitting rather than listening to odd tracks. As such I don’t see much point in breaking it down one track at a time but treating the whole album as one piece of music, as I feel that is what the writers intended.

‘Orcus’ is a beautifully written piece that washes over you with waves of musical drama. It is exciting, reflective, evocative and exceptional in its vision. A truly experimental piece in its composition it shows a willingness to explore just what can be achieved with a modern take on progressive rock. Themes twist and intertwine encompassing western music with at times some almost oriental themes which just adds to its exotic whole. The rhythms are complicated and portray a love of the jazz style alternate time signatures.

In summary, ‘Orcus’ is a truly phenomenal album from a group of musical visionaries. It is huge in its ambitiousness and compelling with its intricate themes. If you like progressive rock or classical music, I highly recommend this album.