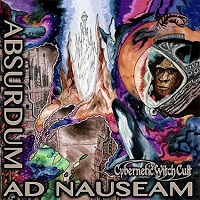 Anyone that thinks stoner metal takes itself too seriously would do well to check out ‘Absurdum Ad Nauseam,’ the latest release from Cybernetic Witch Cult. On a surface level, this Cornwall-based four-piece are just as doom-laden as the Electric Wizards of the world, but once you dig a little deeper it becomes clear that they’ve got tongues lodged firmly in cheek. And yet this is apparently their darkest album so far.

Take ‘The Cetacean’ for instance. A slow-moving, ten-minute odyssey through churning psychedelia and methodical riffing that’s more bass obsessed than Meghan Trainor. It seems like a dense and oppressive song at first, but then you realise what it’s about; space whales. Hyper-intelligent, space-faring whales that owe more to Douglas Adams than Gojira who depart Earth to escape climate change, only to then help humanity in return for the promise they never call them again. It’s got a blues-metal freak out at the seven-minute mark and is remarkably enjoyable, even if the first listen makes it sound monolithically evil.

To some extent, that’s Cybernetic Witch Cult in a nutshell; bruising, sleepy-eyed Sabbathy-ness coupled with a keen sense of the ridiculous. They never reach the outright silliness of Evil Scarecrow, but you can’t give your songs titles like ‘Cromagonaut’ without some awareness of how inherently daft heavy metal is. Thus, while ‘Absurdum Ad Nauseam’ is packed with heaviness, it’s also fun. They can be brutal, but you also get the impression they’ll be smiling right through their live shows and buying a round or two once the set is over.

The sci-fi theme is a nice touch as well, these lads take more from intergalactic travel than they do from cathedrals and graveyards. ‘Spice’ is inspired by Frank Herbert’s seminal ‘Dune’ novel and is a bombastic highlight, full of riffs the size of Sandworms and could even be the soundtrack to a party. One that celebrates the successful completion of a vast Martian pyramid under the gaze of a tyrannical alien overlord perhaps, but a party nonetheless.

The album is bookended by the two part ‘Hypercomputer,’ a conceptual slice of doom that plays with the theory that the entire universe is a simulation created by a vast machine. It’s long-winded and atmospheric, but it has an easy-going vibe and you can easily imagine a teenage Keanu Reeves blissing out to this. Then there’s ‘The Ivory Tower,’ a massive prog-influenced number that harkens back to the days when metal was expected to be expansive, free-wheeling chaos.

What makes it all the better is the sheer number of riffs they have tucked up their collective sleeves. Cybernetic Witch Cult can groove man and there’s not one song here that doesn’t come with a chunky, down-tuned power chord slam. ‘Absurdum Ad Nauseam’ is tailor made for riff junkies and if you like your metal to envelop you in a wall of speaker-troubling swagger, you’ve gotta check this out. Granted, it’s not quite as good as its predecessor (2017’s ‘Troglodithic Trip’), but it’s still a mighty fine trip into the depths of the deepest headspace.