Cryptex – ‘Once Upon A Time’ (Steamhammer/SPV) 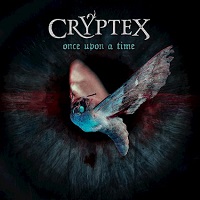 When is a band’s third album perhaps not their third album, but regarded by the band who produced it as possibly their second album? Confused? Well, so were we when this, the “third album” from German progressive rockers Cryptex landed on our desk at ÜRHQ… because the band themselves regard ‘Once Upon A Time’ as the logical follow-up to their debut, 2011’s rather elegantly titled ‘Good Morning, How Did You Live?’ Still confused? So, are we…

To try to unravel the riddle, we’ll let band founder and mastermind Simon Moskon explain his thinking: “During our debut we were wild, impetuous and reckless, full of euphoria. Our second album sounded bulkier, a bit constipated and withdrawn. ‘Once Upon A Time’ builds on our first album but with a lot more experience under our belts – as human beings but also as musicians and composers. You can hear that the new songs are created in a much more organic and liberal way, made of an endless number of colourful dots.” Does that make things a little clearer? No, we didn’t think so either! So, let’s delve into the grooves of this enigmatic opus in search of further edification, shall we?

If you’re looking for an immediate musical reference point, think Coheed And Cambria-style progressive melodic rock. In its first half, ‘Once Upon A Time’ lies somewhere in the midst of traditional Seventies UK prog, particularly the folkier leanings of the likes of Jethro Tull and Camel, and Euro contemporaries such as Focus, but with a hard rock edge as applied to the sound by the likes of Rush, Kansas and Styx, and you’re pretty close. The sound is very much keyboard-led, with lilting piano harmonies laying most of the groundwork throughout, the guitars almost an afterthought in many instances: if you’re expecting modern heavy prog metal miens a la Opeth or Haken, then you’re going to be sorely disappointed. Having said that, it should equally be noted that it does have its heavy moments, such as in the latter section of the excellent lead single ‘Bloodmoon’.

Like all good prog albums, ‘Once Upon A Time’ is a complex beast, with multiple layers for the listener to explore, with multiple twists and turns: just as you think you are getting to grips with it, it takes a sudden turn, adding something new to the mix, such as the massive saxophone-led orchestration on new single ‘Two Horned Crown’, or the Muse-esque guitar crunch on its predecessor, ‘Haunted’, which closes out the first half of the album.

Cryptex do defy some of the expected prog stereotypes, particularly in relation to song lengths: with the 12 songs coming in at just under a total of 44 minutes, only two of them exceed the five-minute mark, and five of them actually clocking in at between three minutes and just over three-and-a-half and closer ‘Leaving’ signing things off at a positively punk-ish two minutes and 24 seconds. The longest of the tracks, the positively epic ‘Reptiles’, is also the one song which fits best into a pure “prog” descriptive, and prefaces the album’s very succinct final section, which is where Moskon reveals some of the album’s more surprising elements, such as the Gogol Bordello-style music hall swagger of ‘I Don’t Know Why’, the positively catchy alt-pop of ‘The Promise Keeper’, and the baroque-noirish ‘I See It In Your Eyes’. The second “half” of the album is definitely a lot more avant-garde – and I’d go as far as saying weirder – than the more traditional first part, portraying a dystopian soundscale worthy of the Grimm brothers’ most fervid imaginings.

Partially because of this change in tone, ‘Once Upon A Time’ is a confounding album. Not confusing (despite my assertions at the top of this review), but one which gives you the feeling of being an explorer venturing into previously uncharted territories without even the aid of a compass to guide you. It has an immediacy which belies a lot of the complexity which is going on behind it’s gleeful façade, and helps to make it a very enjoyable listening experience, even on just the first spin. And it’s definitely an album worth checking out if you like your prog a little bit off kilter and off radar.