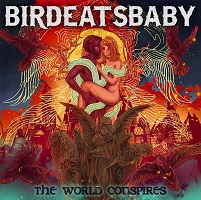 Sometimes, you just glance through the available albums and take a punt on a band you’ve never heard of before, based solely on their genre. Dark progressive rock? Sure, that sounds like my kind of thing. A glance at their social media, classical, gothic and metal are also included, so my interest is definitely piqued. Put the album on and then…

While I started off with a level of curiosity about quite what to expect, after a few listens, I’m not sure I am any the wiser on quite how to describe their sound. Maybe Nick Cave doing a cinema noir soundtrack, with heavy elements of prog rock at various times and even a smattering of jazz. If this sounds confusing to you, don’t fear, the album is actually stunning, both in production and in terms of performance from each member. Mishkin has a phenomenal voice, the smoothness and class of Shirley Manson belting out a ’50s style one minute before soaring off on to another level altogether, while Hana’s violin and cello work provides an almost second vocal at times, managing to both harmonise and take turns leading with Mishkin.

While they may be very new to me, they’ve been around a while – an upload from 10 years ago is in the top 10 results on YouTube – with that familiarity showing in terms of the breadth and depth of their songwriting, as they are clearly entirely comfortable with each other in each facet. Several listens in, I am still struck by the sheer quality of the tracks in general and the number of different feelings and sounds they have produced within the one album, whilst still making it sound like a coherent whole. Levels of dissonance at times, an operatic track, sumptuous melodies and harmonies, it feels like a journey as we meander through it to the point I would have had zero qualms had it been described as such, or even as a concept album, given the storytelling feel that the album as a whole creates. We have the moment of betrayal in ‘Dido’s Lament’, the escape and chase in ‘Kill No One’, the set up for the sequel in ‘Bad Blood’ and the closing credits in ‘Look Away’ – it would sit perfectly well as an action film theme soundtrack.

While I may not have known them before, they’ve definitely won me over in a big way. The sheer ability that is shown by each member throughout, both in an individual and collective manner, shows a level of talent that should have a much wider audience than they currently garner. I wrote in my Bent Knee review that it was by some distance, even in a year of very strong releases, my favourite album – well, there is definitely a race on for that again now. Your ears will thank you for purchasing this album for yourself.

‘The World Conspires’ is released on Friday (18 October). You can get your copy HERE.