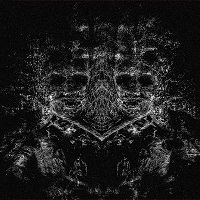 Let me start by painting a picture for you. I open my email and I see that I have a new album that has been sent to me for review. I take a look at the subject line and see that it is a band that I have never heard of. Awesome! I love to hear new bands I did not know about before. I keep reading and see that the album is called ‘Hatred’. Okay, so probably something pretty heavy. Sounds good to me. I open the email and where there is usually a paragraph or two about the album to give you an idea about what to expect or some backstory about the making of the album this time there is just one sentence and all it said was, “four intense tracks, filled with the purest hate you’ll ever hear!” What on Earth have I gotten myself into?

The opening track starts with dead air slowly fading into a low static sound mixed with a wind noise similar to a microphone recording on a windy day at the beach. After that fade in the track goes totally nuts and stays there the rest of the album. I don’t know how they manage to stay at that pace for even one track let alone all four. Especially considering the shortest track it seven minutes long. This album will not give you a break, and why should it?

Lyrically I can’t tell you what the tracks are about. Like with most black metal it is an extremely intense and screamed vocal style that takes a little work to really figure out what is said. However, fitting with the theme of four tracks of pure hate the vocals are dead on. Gritty, aggressive, and angry. They absolutely convey the intended emotion to the listener. You can feel the rage throughout and marrying that intense vocal with the speed and aggressiveness set by the drummer with his jackhammer of a double kick pedal you can fully tell why the album is called ‘Hatred’.

In all honesty, this album is not for everyone. You really need to be a special kind of person to look for something like this but if you are that person then ‘Hatred’ is one you need to check out. It is raw emotion boiled down to its purest form. I don’t know if I could listen to something this high energy all the time as the intensity can get overwhelming at times, but it is definitely worth the ride. As a bonus, it will absolutely terrify the neighbours – and that is always fun!