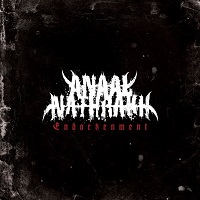 Things are pretty bleak at the moment. Everyday brings a new selection of dreary news either direct from the media or through the social platforms where comment sections are rife with ignorance, intolerance and tin foiled hat finger pointing. Music is an escape, a safe retreat in which the listener can unplug and unwind. This is known. ‘Endarkenment’ is not an escape. The new album from Anaal Nathrakh delivers a nihilistic sledgehammer of social commentary right to your face and shouts at you from the first note through the next forty odd minutes. The way it does this though is musically brilliant.

We open with the title track lead single which grabbed so much attention upon its release. The lyrics are heavy in terms of content with powerful tremolo picked riffs and dominant blast beats to match. However, the structure builds to include catchy hooks and a superb operatic, melody led chorus that twists the path musically into almost uplifting territory. This catches the listener off guard but only increases the pull of the music. This technique of turning the sonic feel of the track upside down even if the lyrics are still harshly dystopian is a trait running through the album. Tracks like second single ‘The Age of Starlight Ends’, ‘Feeding The Death Machine’ and ‘Create Art, Though the World May Perish’ all use it to great effect, using the chorus sections to set up a stark juxtaposition to the verse delivery that heightens the power of track.

This is not to say that they’ve only gone down one song writing route. There are still many other standout moments of pure ferocity that seasoned fans have come to expect. ‘Thus, Always, to Tyrants’, ‘Beyond Words’ and ‘Singularity’ hit hard. With rapid fire tempos, pummelling rhythms and razor-sharp riffing the music smashes into the listener. The vocals drop the melodic operatic of previously mentioned tracks, adopting a mix of deep gutturals and falsettos that could cause serious vocal injury to the untrained. The constant throughout all tracks is the messages regarding the destructive nature of humanity and the turning away from an enlightened path to something that sees the loss of hope. An encapsulating endarkenment.

For die hard fans, there may be a grumble relating to the increased inclusion of melodic hooks and catchy chorus lines within the album. However, Anaal Nathrakh have never been a band that can be accused of making the same album twice. They’ve consistently built and evolved on previous releases. Previous album ‘A New Kind of Horror’ received a mixed welcome but ultimately relit the fire of the band and ‘Endarkenment’ certainly builds on that energy and has matured it. The closing minutes of ‘Requiem’ offer a further insight into this compositional maturity to the band as its layered melody builds to a grand yet soothing conclusion from what has gone before.

It’s an album full of power and precision. When it comes to the technical delivery of the music, there’s a lot of work that has gone into the song writing. Each riff and lyric has been well thought out to convey the messages within the songs without any misinterpretation.  Like I said at the beginning this isn’t escapism, this is a blunt reflection of the grimly harsh present delivered in ten towering tracks.