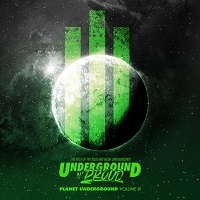 Regular readers of Über Rock, and even not-so regular (have you not been taking your bran?) interlopers, will know that our very ethos is about supporting underground music, championing the underdogs that the mainstream deem to be beneath their obnoxiously upward pointing noses and bringing to light the best new talent that this diverse, nefarious Überverse has to offer. So, when an album comes along from a label that openly declares that it is equally proud to champion the underground, and does so through a series of free-to-download compilation albums, then of course we’re going to check in at that particular motel and let the bar-room vibes flow over us…

While a lot of compilations seek to stick to one particular musical mien, the ‘Planet Underground’ series is not afraid to extrapolate and push boundaries, and not just geographically (34 different countries are represented), touching virtually every base you can think of, from the opening late-Sixties style psychedelic vibe of Switzerland’s Morningless to the disco/funk/horn-infused trip to ‘Fool’s Paradise’ that we take courtesy of Jake Odin And The Marching Band to the Clutch-meets-ZZ Top dark bayou blues of Norwegians Pzyrocks and the Mastodon-evoking heavy grunge of Greece’s Grande Fox. And that’s just the first four of the 40 tracks presented here. Yes, so far, we’re only scratching the surface of this eclectic and deep-diving collection.

As we move through the playlist, there’s more and more envelopes opened, from the dense post-punk disharmonics of Croatia’s Kevlar Bikini to the sludgy cosmology of Russia’s Lunar Woods, the NWoCR evoking shenanigans of Holland’s Black Nazareth, the hairspray sleaze rawk of Czechs Bad Joker’s Cream, fist-pumping trad metal from Spain’s Blackhearth, the power metal pomp of Seven Thorns and the sort of Hevy Devy widdly-diddliness, courtesy of Irishman Keith McCoy and Argentina’s Hermit’s Maze, that would have my prog-loving colleague Jase positively creaming his jeans with excitement. There’s epic Genesis style prog thanks to Egypt’s Riverwood, while Depeche Mode jam with Rammstein to produce acidic gothic industrialism courtesy of Luxembourg’s MIY, Bollywood is infused into Linkin Park-style rap metal courtesy of Ausomapto, and folk meets nu-metal with Chile’s Colt38. Vicious metalcore is the order of the day with the ÜK’s Dayshifter, which compliments and counterpoints the brutal electro-death of Aussies The Veracious Ones, the deep, nihilistic black metal growlings of Consecration and the symphonic melodeath of Venezuala’s Stratuz.

Of course, with a compilation with as wide a scope as this, there are some wide misses as there are definite bullseye hits. I’ll not dishonour any of the acts whose material did not appeal to me on a personal level, because to namecheck them would be to do just that: but, like everything in life, it’s a matter of personal choice, and there are things we all like or don’t like. That said, this compilation is a very tasty sampler of the global state of rock and metal in all its myriad formats and locations, from the inner suburbs of the Über Kingdom to the dense nether regions of South America and beyond.

I’m sorry I missed the first two instalments of this ‘Planet Underground’ series. It’s an oversight I’ve now corrected… well, they are free to download, so it would be a real shame not to give them a blast and discover new aural experiences. The Überverse is brimming with undiscovered, underground talent, and we’re happy to shine a light on just a small portion of it.