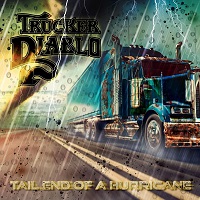 There can be no doubt about, but the past 14 months or so have definitely been something of a shitstorm. But, with roadmaps with various degrees of clarity and direction now being pinned to government office walls the length and breadth of the Über Kingdom, and beyond, it could most definitely could be argued that we now find ourselves riding the tail end of a hurricane… which just happens to be the highly timely title of this, the fifth studio album from Northern Ireland’s most powerful hard rock machine, Trucker Diablo.

Proving that it takes a helluva lot more than the mere issue of a global pand(dem)ic to stop the Big Truck from keepin’ on rockin’ and rollin’ ever onward, this is the four beer drinkers and hellraisers from mid-Ulster doing what they do best – and that is delivering straight-from-the-heart hard rockin’ tunes with huge harmonies, massive melodies and raucous, headbang-inducing riffs galore, along with their usual mix of power ballads and a not-inconsiderable dollop of self-deprecating Irish humour, as exemplified (in particular) on lead single ‘Rock Kids Of The 80s’, which pays affectionate homage to the era in which they, and we here at ÜRHQ grew up, while retaining its tongue rammed characteristically in its cheek…

The Truckers have been building anticipation for the release with a series of weekly-issued singles, the most recent of which is the power ballad ‘Slow Dance’, before maintaining their equivalent of radio silence in the last three weeks prior to the album’s emergence. It was one of these, ‘Insects’, which revealed a side of the Diablo sound which we have not really heard before, as alongside all the big, arena-singalong hooks we have come to expect there has emerged a dirtier, punkier groove, reminiscent of their roots in the NI alternative scene via bands such as Joyrider. The song itself is an acerbic, acidic indictment of the increasingly role which AI, algorithms and bots (not to mention the omnipresent scammers and trolls) play in detecting and dictating our everyday lives, especially at times when we need uplifted not slapped in the gob.

Of course, as mentioned above, the Trucker boys have built their reputation on their anthemic brand of hard rock, and it is here by the spade loads, from the opening declaration of ‘BTKOR’ (please tell me I don’t have to tell you what that stands for!), the celebratory ‘I Am Still Alive’, the fist-punching and dog-moshing ‘Set The Night On Fire’, the rambunctious suvern swagger of the title track, through the incendiary ‘This Burning Heart’, the result is a collection of songs guaranteed to set dancefloors and festival fields alight whenever those feckin’ roadmaps eventually us to do so. There are also the more melancholic mood swings, such as ‘The Edge Of Tonight’, which is built around one of those trademark lilting Lizzy-esque riffs and harmonized vocals that Trucker do so well, and the opening section of the Seger-ish swagger of ‘The Trade’, as well as their now characteristic chill-down style sign off, in the atmospheric and thought-provoking ‘Bury The Ocean’.

There is no doubt that we are, indeed, emerging from the tail end of the biggest hurricane to have hit this planet, at least since the extinction events of primordial times: a global event which has changed the lives of millions, quite possibly for our lifetimes and many more to come. But one thing that it has proven is the resilience of the human heart and soul to prevail and overcome, and that, as I said, it takes more than the challenge of a pandemic to squash the human spirit. We will emerge victorious from the other side of this crisis, and there’s a Big Truck smashing its way through the barricades, rollin’ on with clear intent and cranking the volume up in the process! So, hitch a ride – and make sure you’re wearing your seatbelt, ‘cos the pedal is to the metal and the brakes don’t work!