Stone Broken have announced a run of dates for the latter part of next April, culminating in their headlining appearance at the re-scheduled Heretic Festival on 1 May. 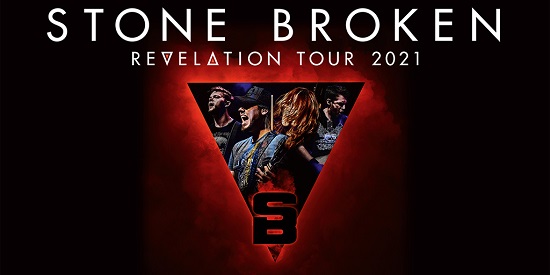 “2020 has been a strange year for everyone, but that hasn’t stopped the ambition, drive and determination of Stone Broken, which is why in 2021 we will be heading out on our most ambitious tour to date. We will be playing the biggest headline shows of our career and will be making them a very special and awesome experience for you guys. We can’t wait to get back out athere with new music, a new stage show and a new energy. I know it’s been a while, but we couldn’t be more excited about our new album and can’t wait to see you on the road!”

Tickets for all shows (except Sheffield, which are already available) go on sale at 10am on Friday (24 July), with pre-sale for O2 venues available from 10am tomorrow (Wednesday 22 July).

Meanwhile, Stone Broken are one of three bands performing at the Planet Rock Live Rocks The Asylum, which will be broadcast live from The Asylum in Birmingham this coming Saturday (25 July). Stone Broken will be performing at 7pm, followed by Those Damn Crows at 8.20pm and Massive Wagons at 9.40pm. All three bands will perform hour-long sets, which will be streamed in full HD, with studio-quality sound. Tickets for the event can be purchased HERE.