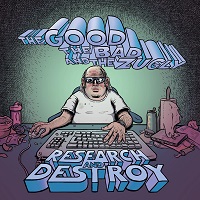 If you’re already a regular reader of Über Rock and are not familiar with TGTB&TZ and their anarchic brand of tongue-in-cheek skate punk-infused action rock, then you might as well crawl back under your bed and jerk off to your daddy’s posters of Agnetha and Anna-Frid or the Spice Babies… Well, we have been championing the Zuglies’ cause since aeons before the cool kids in the mainstream media discovered that they actually are a highly relevant force in the Scandi-rock scene, standing toe-to-toe with the likes of Turbonegro, The Hellacopters and even the mighty Kvelertak and beating them down faster than BoJo realizing that a birthday party is actually that…

Yet again, the Zuglies blast punk rock anthem after punk rock anthem straight into the deepest recesses of your aural cortexes, where they explode with the fury of a well-targeted drone strike, their lyrical themes (many of which are continuances from those explored on 2020’s stunning ‘Algorithms & Blues’) dealing with the pettier aspects of life but putting them on the grandest of stages, highlighting how it is the most niggling of things that often expend the most of our energies.

Charging at you with the force of an enraged bull with a jet engine rammed up its arse, ‘R&D’ is another supercharged slice of faith and life-affirming glorious inanity, proof positive (yet again) that embracing pettiness is possibly the clue to surviving this fucked up life and living it to its full. And yes, you can pogo like a Red Bull-charged three-year old to boot (as long as you do it in the privacy of your own living room, you understand, because we wouldn’t like to have the normality police pay you an unwanted visit now, would we?), to what may well be the best damn punk ‘n’ roll album of 2022.